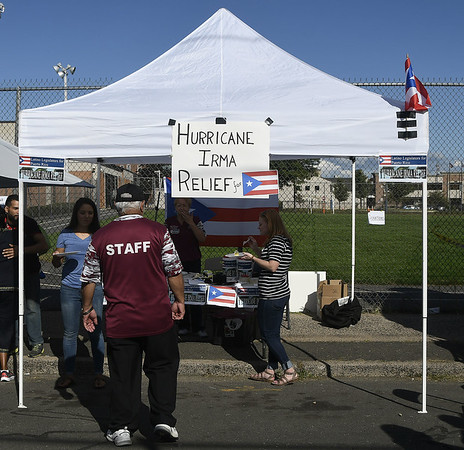 Mike Orazzi | Staff Clothing and other goods, as well as money, for victims of Hurricane Irma in Puerto Rico and elsewhere are collected. Buy this photo

NEW BRITAIN - As many enjoyed Saturdayās Puerto Rican Social & Cultural Festival, a long-standing annual tradition, there was a sobering side to the event this year: the collection of money and goods for people affected by Hurricane Irma.

The festival was a starting point for Hispanic elected officials to collect for Hurricane Irma relief for people on Puerto Rico and other islands, explained state Rep. Bobby Sanchez, D-New Britain.

A booth was set up for donations of money and clothing and other goods.

The festival was centered around the Puerto Rican Society on High Street, and took place between Broad and Lafayette streets.

During the festival, state officials reached out to the public while others enjoyed a variety of foods and entertainment.

Officials will continue to collect funds and goods during a series of events that will run until October, Sanchez said, during other, larger events throughout the state, including in Waterbury, New Haven, Hartford, Meriden and Bridgeport.

āAfter all the events, the collections are given to the Spanish-American Merchants Association in Hartford, who handles the money,ā Sanchez said.

He said that in November, one or two of the 13 Latino state representatives will go to Puerto Rico and bring the money and goods raised. He added that one official most likely making the trip will be state Rep. Minnie Gonzalez, D-Hartford.

āEvery penny goes to relief, there are no administrative fees, that was the agreement with SAMA,ā Sanchez said, before he grabbed a donation bucket with Rep. Angel Arce, D-Hartford, and began to mingle with the crowd.

āItās devastating. They still need supplies. They say there wonāt be drinking water for about six months in Puerto Rico,ā Arce said. āThis effort is to help our countrymen, and everyone in the path of the hurricane, not just Puerto Rico, but the other countries and islands.ā