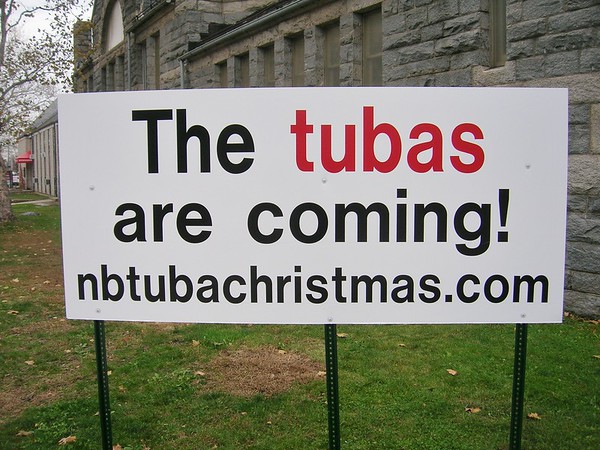 NEW BRITAIN - TubaChristmas is coming back to New Britain on Dec. 15 from 2 to 3 p.m. at Trinity-on-Main.

“We are returning to the tried and true format, with all the players on stage and no procession, just music and fun,” Cynthia Carlson, who is in charge of media and publicity for the event, said.

The program will include popular Christmas songs played by tuba players of all levels and ages, from children in middle school to professional musicians.

Carlson said that event will include players from area bands, colleges and brass ensembles, as well as individual tuba enthusiasts.

The show will include 14 songs. Walter Gibson, principal tubaist of the New Britain Symphony Orchestra, will direct the performers. Melissa Veale, a local actor and attorney, will be the narrator and lead the audience in a singalong.

This holiday tradition is 44 years old, but this is only the fourth time it has been held in Central Connecticut.

According to Carlson, the event has been organized locally by Anne Marshall, who wanted a fun event for her grandchildren and thought that TubaChristmas was the perfect idea.

“What could be more fun than a stage full of tubas and tuba players dressed for the holidays, merrily playing Christmas carols with families singing along? It just makes me smile,” Marshall told Carlson.

The event will include awards in the categories of youngest musician, oldest musician, musician who traveled the farthest distance, school district with most participants and best-decorated instrument.

Trinity-on-Main is at 69 Main St. Parking is available at no charge at the Henry Szczesny Parking Garage, directly across from Trinity-on-Main, next to the police headquarters.

For more information, Carlson can be reached at cindersall@yahoo.com.

Marshall can be contacted at amarshall@lawacm.com.