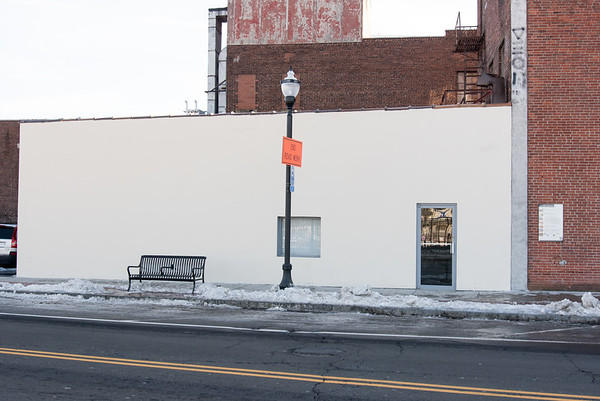 NEW BRITAIN - The Sol LeWitt wall mural that was installed in 2012 on the Dakille Building on Columbus Boulevard is gone.

Installation and maintenance of the multicolored, rainbow-like mural had been covered under a temporary state grant. The mural was removed in the fall, months after the building had changed hands.

The New Britain Museum of American Art, which had received the grant, was responsible for taking the mural down. The museum allowed the new owner of the building to pick a color for the wall. It is now painted solid white.

The art on the wall at 61 Columbus Blvd., directly across from the bus station, was part of Connecticut’s City Canvases Project, which had the goal of reviving Connecticut’s urban areas. According to a publication by the NBMAA, the state wanted to promote visual arts and the work of local artists.

Melissa Nardiello, of NBMAA, said that the initiative was funded through a $1-million grant from the Department of Economic and Community Development and the Connecticut Office of the Arts, with support from the National Endowment for the Arts. It was distributed to 10 cities.

New Britain and the NBMAA partnered to make the art wall part of a public space.

The piece of art was, in part, chosen to honor LeWitt, who was a longtime resident of New Britain and a patron of the museum.

“The downtown was very lucky to have the installation of the Sol LeWitt mural on Columbus Boulevard for the past several years,” Gerry Amodio, executive director of the Downtown District, said. “Sol LeWitt was artistically and historically significant because Mr. LeWitt was a local artist who went on to great success and recognition in the art world. While we are sad to see the mural be taken down it was expected as the Sol LeWitt Foundation governs all control over his works, and they have a defined term limit to their showing. Arts in the city is very significant to our community. Not only do arts make a significant impact to beautify and educate, they tell the story of our heritage.”

Amodio added that the Downtown District is dedicated to the arts and has been a financial supporter of some of the city’s art efforts, including the city’s High Voltage Art project, which has painted art on traffic signal control boxes.

“We presently have the only ‘Bee Across New Britain’ being painted at the Visitors Center,” Amodio said. “When completed, this project will have larger-than-life bees throughout the city.

“A quote widely attributed to Winston Churchill, in regard to funding the arts during World War II, was something like this: ‘The arts are essential to any complete national life. The state owes it to itself to sustain and encourage them.’ If even during the time of war leaders acknowledge the importance of the arts, who are we to question?

“At present we are working with a local business owner who is trying to bring another mural to downtown. We will work hard to make this come to fruition.”

Jose Perez, the owner of the building, said his plans are to lease the space to a business and paint the name of the business in the wall where the LeWitt art mural was installed.