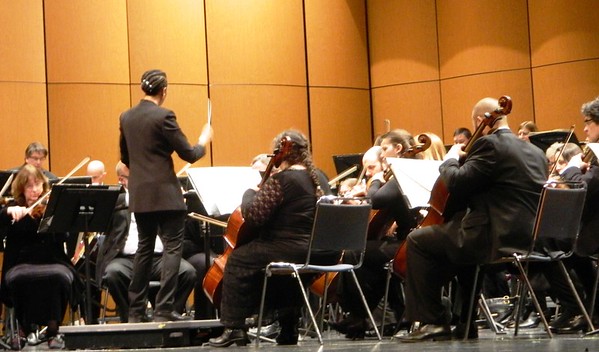 NEW BRITAIN - Connection and collaboration were two words used to describe a performance that took place in the city Sunday.

“It brings a richness to our fabulous, fabulous orchestra,” NBSO Past President Nancy Judd said.

Many among the audience were friends of the NBSO, former board members or relatives of the dancers and musicians themselves.

Leonard Nelson, the first executive director of the NBSO, said he had been attending its concerts since the 1970s.

“She’s a retired school teacher from Berlin,” Jewel said. “She’s been playing in the symphony for many, many years.”

The program began with Russian composer Mikhail Glinka’s “Ruslan and Lyudmila Overture” an 1842 opera based on a romantic fairytale. It was immediately followed by “Slavonic Dance Op. 46, No. 2 in E minor.”

CCSU Dance Co. Artistic Director Catherine Fellows emphasized that her students included dance education majors and minors, some of whom are also athletes at the school.

“We invited the dancers’ families, to develop the skill of being an audience member and acquire a taste and flavor for the performing arts,” Fellows said.

Fellows also collaborated with the NBSO several years ago for a show called the Carnival of Animals.

“It’s very important to recognize the commitment of other types of artists,” she explained. “I just love working with live orchestras. It teaches the students a lot about listening.”

Bovell and Kim fostered their own magic on stage. An audience favorite was Charles Gounod’s “Faust” ballet.

Kim is a founding member of the Argus Quartet, Julliard School’s Graduate Resident String Quartet. She is also the first prize winner of the 2012 International Solo Violin Competition in Cremona, Italy.

“It’s been such a great experience,” Kim said backstage during intermission. “The symphony members are such wonderful people to work with and Kalena is just incredible.”

Bovell made her professional debut with the Chicago Sinfonietta during its 2016-17 season. She is currently Music Director with the Civic Orchestra of New Haven and Orchestra Director at the Loomis Chaffee School.

“It’s definitely our most important event of the year,” Vice President Cynthia Carlson said. “The kids are our future.”

The event brings together over 1700 fifth-grade students from New Britain, Newington, Plainville, Berlin and Rocky Hill. They are bused to CCSU, where many have their very first experience with a live orchestra.

The last five young adults to be awarded NBSO scholarships recalled attending the concert as youngsters.

“That’s where their love of music first came from,” Carlson explained.

The orchestra’s final event is “Spring in Bloom” – set for May 5.