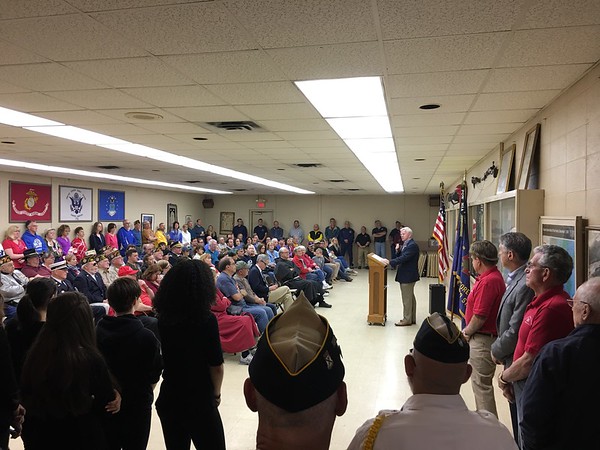 Charles Paullin | Staff Sean Connolly, who was state commissioner of veterans affairs at the time of last yearâ€™s rained-out parade, speaks at the VFW Hall. The ceremony, which was moved indoors due to inclement weather, was hosted by Charles Colaresi and the veteransâ€™ commission, and featured additional speakings from Mayor Mark Kaczynski and performances by the Berlin High School Chorus. Buy this photo
Published on Thursday, 1 March 2018 21:14
Written by Charles Paullin

Saturday, May 26, has been reserved for the parade, with Memorial Day, May 28, as a rain date.

And that rain date might be something to keep in mind.

In previous years, the parade has been held on the Monday on which the holiday is observed, with no rain date. Last year, when it rained, the parade was canceled and the observance was limited to a guest speaker and high school choir performances in the VFW Hall.

The parade will be organized as in years past, with staging and set-up at St. Paul Church and a 9 a.m. start, Colaresi said.

He said Berlin police have approved the date change for the parade, which runs down Farmington Avenue and concludes at Veterans Memorial Park, near Stop * Shop and Massirio Drive.

The second chance to hold a parade means a second chance for the bakeries, sandwich shops and other merchants along Farmington Avenue to do business, Colaresi said. The parade should be done by 10:15 a.m., he added.

The new date coincides with the Berlin Volunteer Fire Department car show at Sage Park, but Colaresi said he got the OK from former Fire Chief Jim Simmons, whoâ€™s involved with the show.

Having the parade in the morning, while the car show continues throughout the day, may get more people to attend the show, Colarasi said he told Simmons.

Proceeds from the car show go to the Veterans Commission to help needy veterans.

Last year the fire department donated $6,300 to the commission from the car show and other fundraisers.

Colarssi said he is close to having Department of Veterans Affairs Commissioner Thomas J. Saadi as the guest speaker for this year.