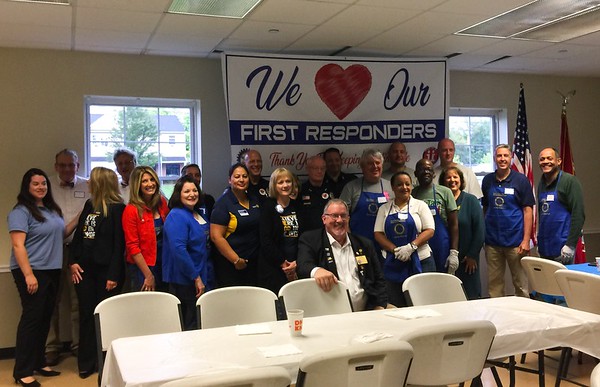 Courtesy of Shreeja Joshi First responders, volunteers and members of the community pose for a photo at the Kensington-Berlin Rotary Club's first annual First Responders Appreciation Breakfast Saturday at the Kensington Volunteer Firehouse. Buy this photo

BERLIN - Sept. 7 is no ordinary day in Berlin.

Members of the community served firefighters, police officers and EMS personnel a hearty breakfast of eggs, pancakes and even breakfast pizza at the Kensington Volunteer Firehouse.

“I am happy to see so many people gathered here today to celebrate, honor and thank our first responders,” said Shreeja Joshi, president of the Kensington-Berlin Rotary Club, which organized the breakfast.

“It’s great to come together like this and thank all our first responders for all they do,” said Kaczynski.

“Berlin is kind of a town of volunteers,” he added. “Nothing like the heart of a volunteer.”

There are volunteers in both the Berlin and Kensington fire departments.

The Ringtones from the Kensington Congregational Church performed the National Anthem and gave a blessing. Pastor Joe McGarry of the Prince of Peace Church gave an Invocation.

“I think it’s important that these people, whether they’re volunteers or not, know that the community and the rotary appreciate what they do,” said Mark Brady, Rotary Club District Governor for western Massachusetts and northern Connecticut.

“These kinds of things are important,” he added.

Brady has a first-hand experience of just how essential first responders are. When his house burned down four years ago, firefighters came to the rescue and gave him some solace in a harrowing time.

“They’re the glue that keeps this country together,” Brady said.

Town Councilor JoAnn Angelico-Stetson, who volunteered at the event, said she was thankful to be able to express gratitude to those who put their lives in danger every day to protect the community.

“When they leave their house in the morning, they don’t know if they’re coming back,” she said.

“The fact that we’re saying thank you to our first responders is amazing,” said town councilor and fellow volunteer Karen Pagliaro. “It’s the least we can do.”

The first responders not only enjoyed the breakfast, they also relished in the opportunity to be able to see people they don’t usually see unless it’s a crisis situation.

“I think the support we have from not only the community but also organizations like the rotary club is why the first responders are so strong in the Town of Berlin,” said Deputy Police Chief Chris Ciuci.

Ciuci said he looks forward to more events with the rotary club.

Kaczynski aims to have the event grow bigger in time, eventually including the families of first responders and the public.

“It’s the first of many more to come,” he said.