'It certainly means a lot to have the support': Military personnel across the world receive care packages from Berlin-based Boxes to Boots 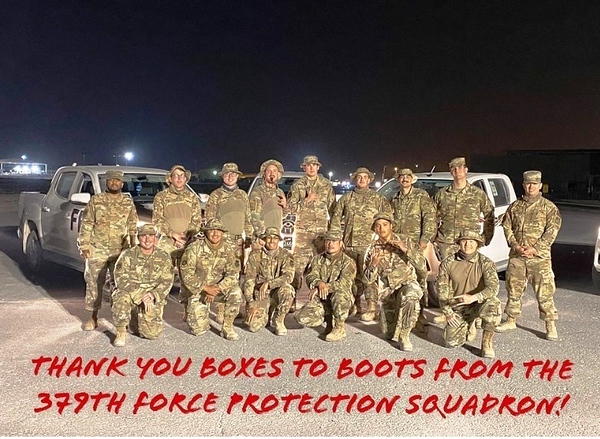 Courtesy image | The 379th Air Force Protection Squadron in Afghanistan sent this photo to Boxes to Boots, thanking the organization for care packages sent over the holiday season. Buy this photo 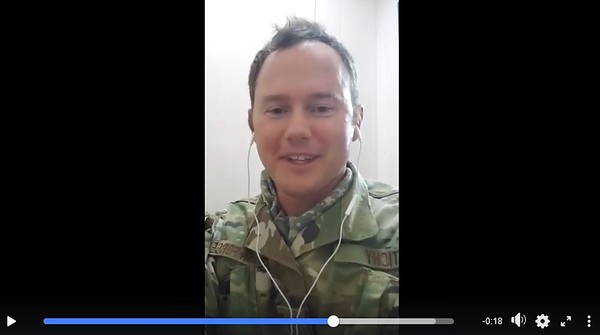 | A still image of Connecticut native Air Force Technical Sgt. Stephen Tichy from a video he sent to Boxes to Boots as a thank-you for care packages that arrived to his unit's base in Kuwait in December. Buy this photo 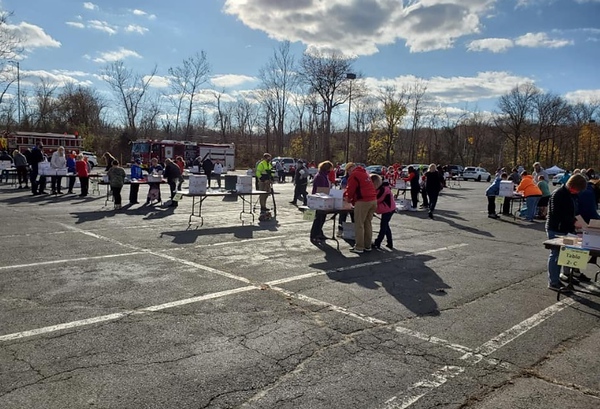 Courtesy photo | Groups of volunteers wrap gifts and pack boxes to be shipped to U.S. troops overseas by Boxes to Boots. The packing event took place at New Britain Stadium this past November. Buy this photo

BERLIN – U.S. Troops serving around the world are thankful for the support of local residents through non-profit Boxes to Boots.

The Berlin-based organization sent hundreds of care packages to military servicemen and women in Niger, Romania, Afghanistan, Kuwait, Jordan, Iraq and Syria over the last few months. A safe and socially-distanced outdoor packing event at New Britain Stadium back in November drew upward of 300 volunteers, and shipments of gifts arrived to bases just in time for the holiday season.

“It was a pretty amazing feeling on that one day we spread gratitude around the world,” Boxes to Boots President Kristen Gauvin said this week.

She was concerned the covid-19 pandemic would inhibit the organization’s yearly holiday distribution but with hard work and dedication, it was still very successful.

Berlin and New Britain Police and Fire Departments participated, as well as Boy and Girl Scout troops from both towns and families of deployed soldiers.

“There were a lot of tears of joy,” Gauvin said. “I was nervous we wouldn’t be able to hold the event, so it was nice to see people did turnout despite covid.”

Since receiving shipments of care packages with hand-written thank you notes inside and photos of the groups who packed them, soldiers serving overseas have reached out to Boxes to Boots to share their gratitude.

Air Force Technical Sgt. Stephen Tichy sent Gauvin a video of him opening the packages from his base in Kuwait.

“Being that my home state is Connecticut it certainly means a lot to have the support,” Tichy said in the video.

His wife is pregnant with the couple’s very first child at their current home in South Carolina, and the package lifted his spirits.

“This is the first Christmas that I’ll have away from my family being in a deployment zone, so it certainly means an awful lot to me,” Tichy said.

Gauvin said his words were “inspiring” and indicative of Boxes to Boots’ true mission.

“It’s really difficult for soldiers being away from their families,” she said. “They are so appreciative to know people back home are supportive of them.”

Next up, Boxes to Boots is preparing to send a Valentine’s Day package to a female soldier originally from New Britain and gifts for her unit as well.

“This spring we have troops deploying to Africa and Korea so we are hoping to send them boxes around Memorial Day in May,” Gauvin added.

Local families who have sons, daughters or other family members who are deployed often reach out to her to see if Boxes to Boots can include their loved one in a shipment.

This summer, there will be a car show fundraiser for Boxes to the Boots in Berlin. In the fall, volunteers are planning a motorcycle ride to help with the cost of shipping care packages next Christmas.