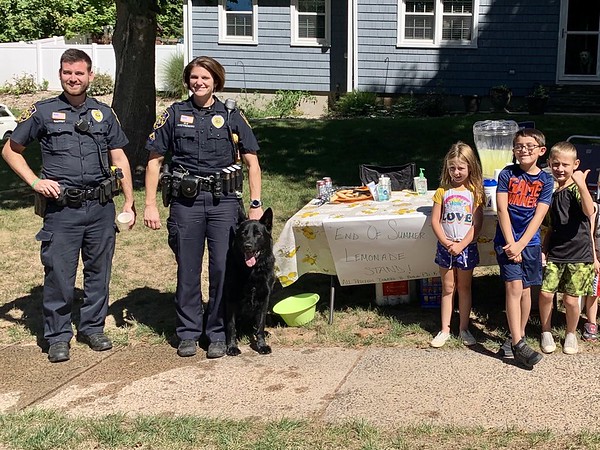 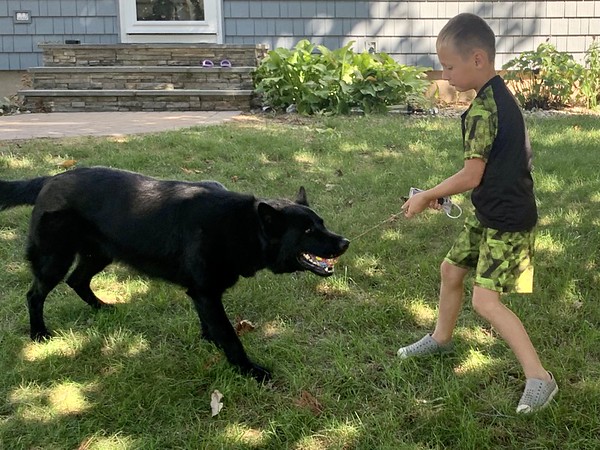 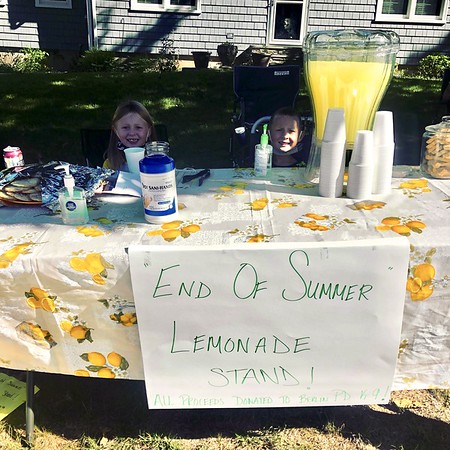 BERLIN – Twins from Berlin were each awarded a Berlin Police Department Appreciation Coin after raising $485 with a lemonade stand to benefit the Berlin Canine Unit.

“We had been trying to figure out a date when we could go (to the station) instead of just giving the check to [Officer] Aimee [Krzykowski]. She wanted the deputy chief to be there and it took some time, a couple months, before we got to go to the police station,” said Cathryn Madey, the twins’ mother.

Cathryn and her husband Dan thought they would simply be dropping the check off and leaving but were just as surprised as the children when they saw they would be receiving the appreciation coins.

The coin was introduced by the police department to reward individuals in the community for good deeds.

“Whether it’s helping with an investigation or jumping in and saving somebody’s life, these are the coins we can give out as a thank you to people to encourage them to continue to do good things and just a little bit of recognition from the police department,” Krzykowski said.

Cathryn said her children have been carrying the coins around and don’t want to put them down.

“I’m always like, ‘we’re going to the grocery store, you have to put the coin down because if you lose it you’re not going to be able to go back to the police and ask for another one,’” she said laughing.

Brynn and Ayden hosted the lemonade stand over Labor Day weekend of 2020.

“We live on a street that has kind of like a dog park at the end of it and we have two dogs so we always bring our dogs to the park, Cathryn said. “So we thought it was the perfect place to set up a little lemonade stand to get some traffic. The kids wanted to help a cause and we were thinking about what we can do, where we can donate the money and I said the canines really don’t get a ton of funding from cities, so how about we raise some money for our canine unit here in town.”

Cathryn said she never thought they’d raise as much money as they did.

“We thought we’d raise maybe $100 including what we donated as a family, but the community came out and really supported it,” she said. “I thought it was great.”

The family set up their table, sign, homemade lemonade and cookies and some dog treats, and with the help of Cathryn’s Facebook posts on her personal page and in Berlin Buzz, community members showed.

“If somebody bought lemonade and had a dog we would give the dog a free dog bone,” Cathryn said. “The kids were having fun, they were helping pour the lemonade and they loved handing out the dog treats to the dogs.”

They also got a visit from a canine they were supporting.

“When we found out they were having a lemonade stand we were lucky enough to be working that day so I went by with canine Casner (and Officer Hollin Daffey),” Krzykowski said. “And when I found out they were going to donate the proceeds to the canine unit it really warmed my heart. We love it when the community takes an interest in us and to have kids be so proactive, as this was something they wanted to do to give back to the police department, specifically to the canine unit; it really made me happy.”

The children had an opportunity to meet Casner prior to the lemonade event so they were all very familiar with each other.

“I’m very lucky because my canine partner loves children,” Krzykowski said. “He was playing ball with them, running around the lemonade stand, and they were chasing him and having a good time.”

Cathryn describes Brynn and Ayden as rambunctious and caring kids who really love to help out and love gymnastics. Brynn wants to be a veterinarian, while Ayden wants to be a scientist.

“They have this unique bond, I know that sounds stereotypical because they’re twins, but they definitely really care about each other,” Cathryn said. “A couple days ago when they didn’t have school for the holiday my husband took my son to work with him and I had a little girl’s day with my daughter. We went to Target to pick something out and she picked up a toy that she wanted really bad and then she goes, ‘wait mom, I think I need to get this other toy (because Ayden loves koalas) so he can play with it too and not just for me.’ Low and behold my husband takes Ayden to Target too because I had told him the story and Ayden wanted to get Brynn a special keychain for her backpack because she loves key chains.”

The Madey twins certainly care about each other and have also proven to care for others as well.