Courtesy image | A site plan of the Steele Center in Berlin, which broke ground this year. Buy this photo 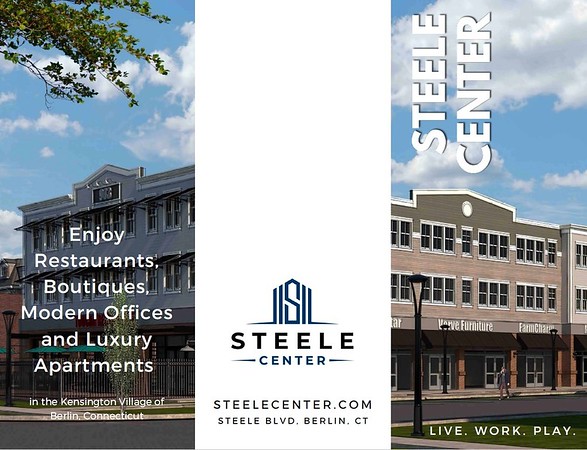 BERLIN - Progress is coming along on the 80,000 sq. ft. Steele Center project off Farmington Avenue, a mixed-use development that broke ground in March.

“We are currently under construction with 9 Steele Boulevard; the steel frame is up and wood framing is now going up,” Tony Valenti, one of the principals of Newport Realty Group, told the Herald Wednesday.

The first of four buildings the Southington developer has planned for the site, 9 Steele will have 8,000 sq. ft. of commercial space on the first floor and 16 one- to two-bedroom upscale apartments on floors two and three, ranging from 600 to 950 sq. ft. Completion is expected by May 2022.

“We have an ongoing waiting list of folks who want those apartments and we are looking to obtain a restaurant for the side facing Farmington Avenue, where we are building an outdoor patio,” Valenti said.

Once the property’s north-facing parcel is remediated and sealed, a four-story building will be constructed there with 60 one- and two-bedroom apartments and parking below.

The remaining two buildings will consist of retail, commercial and office space.

It was the adjacent Berlin Train Station that drew his company to this particular site. Newport Realty has already completed other smaller developments at 848 and 861 Farmington Avenue, now home to small businesses and restaurants.

“The train station is one more very key amenity that’s going to allow us to draw residential and commercial tenants to the Steele Center,” Valenti said. “We hope we can also provide supply to that demand of our rail system.”

Newport first submitted its proposal to the town in Sept. 2018 and signed a purchase agreement in May 2019. The developer paid $460,000 for the two parcels along Farmington Avenue, the former site of a warehouse furniture store, and $1 for the Brownfield site on the property’s north end, which was formerly an industrial use.

“This is a nice partnership between the Town of Berlin and Newport Realty Group,” Berlin Economic Development Director Chris Edge said.

Although construction materials have faced shortages and delays, the developer has kept to his timeline and the project remains on track.

“We’ve obtained all our necessary approvals and we’re completely financed,” Valenti said. We’re ordering construction products well in advance and we’re working as hard and smartly as we can to avoid any delays.”