People rally for freedom of choice, reproductive rights this Fourth of July weekend 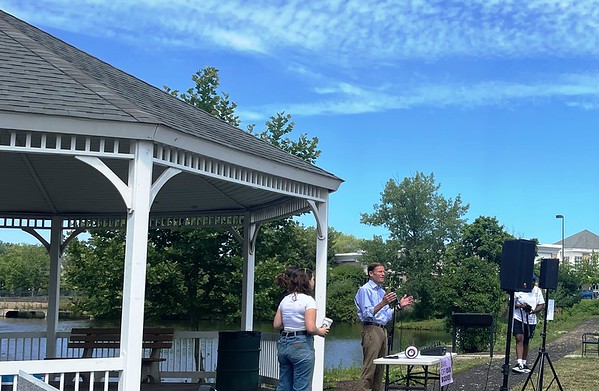 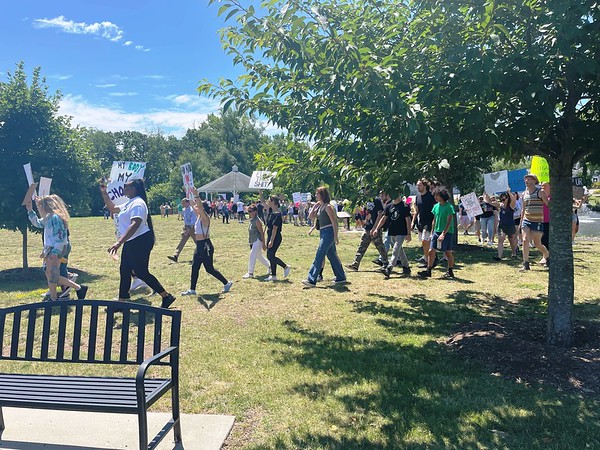 Erica Drzewiecki | Staff -- Sabbanah Blouin holds up one of four signs she made during Berlin's Protest for Reproductive Rights in Veterans Memorial Park Sunday. Buy this photo

BERLIN ‚Äì Americans typically celebrate freedom and independence on Fourth of July weekend, but morale has been low in the land of liberty since Roe vs. Wade was overturned 10 days ago.

Fireworks, fun and freedom were exchanged for a fight for women‚Äôs reproductive rights at Veterans Memorial Park in Berlin Sunday.

‚ÄúIt kind of sucks this is how we have to spend our holiday weekend,‚Äù actress and WNPR host Carolyn Paine told the crowd. ‚ÄúThis Fourth of July I know it‚Äôs hard to celebrate our country and be happy, but those fireworks in the sky are going to light our fire.‚Äù

Hundreds of men, women and transgender people showed up to rally for the unrestricted Constitutional right to an abortion. This right was taken away on June 24, when the U.S. Supreme Court overturned the monumental 1973 ruling, leading more than 12 states to take actionable steps banning the medical procedure.

The protest was co-organized by friends Lyla Bennett and Lindsey Leary.

Bennett shared American history about the original Roe v. Wade case and decision before sharing her own thoughts.

‚ÄúEvery day now laws are being put in place restricting our freedoms,‚Äù she said. ‚ÄúOur grandchildren should not be fighting the same fight our grandparents fought.‚Äù

The microphone was also yielded to members of the crowd, which included U.S. Sen. Richard Blumenthal and former Berlin Town Councilor JoAnn Angelico-Stetson.

‚ÄúOn Thursday the Supreme Court decided anybody who owns a firearm has every right,‚Äù Blumenthal said. ‚ÄúThe next day they decided that women have no reproductive rights. That‚Äôs not American. I‚Äôm here to make sure we do everything possible to restore and protect that right.‚Äù

Angelico-Stetson shared a personal story about her choice to have an abortion years before.

‚ÄúThat choice allowed me to live my life on my terms and decide to have children on my terms,‚Äù she said.

And to the younger people who don‚Äôt remember the days before Roe vs. Wade, she added, ‚ÄúYou can‚Äôt imagine what your mothers and grandmothers had to go through if they wanted to exercise their reproductive rights.‚Äù

Donations were accepted for the National Network of Abortion Funds, which provides financial assistance to people seeking the procedure.

Berlin resident Karen Pagliaro, a nurse by trade, announced that she would personally take in anyone around the country who needed an abortion, drive them to have a safe procedure here in CT and care for them in the aftermath.

‚ÄúI was sexually assaulted in 2019,‚Äù Truitt told the crowd. ‚ÄúIf it were not for the fact that I live in a state where I can get the Plan B pill, I might not be here today.‚Äù

Savannah Blouin of Manchester said that in a few weeks she had a hysterectomy planned, sharing the name and location of the surgeon performing the procedure.

Berlin resident Kat Geschimsky described herself as gender-queer, a foster kid, and ‚Äúterrified.‚Äù

‚ÄúIf people think every life matters,‚Äù she pointed out, ‚Äúwhat about all those little kids in foster care who are getting sick, dying and being abused? Who‚Äôs caring for them?‚Äù