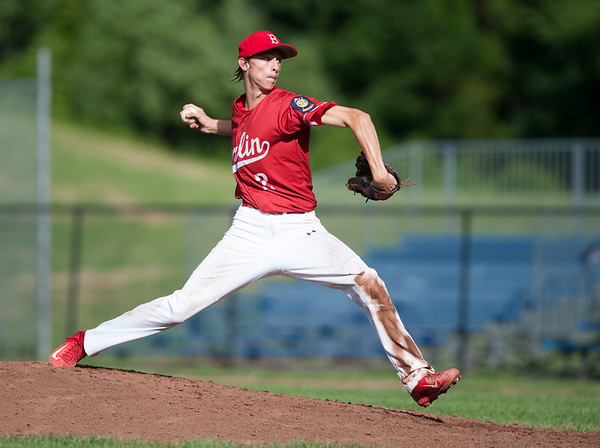 BERLIN - Though they had few opportunities, the Berlin American Legion baseball team took advantage of every one to avoid elimination in state tournament play.

Berlin was able to scrape by Moosup with a 3-2 win Tuesday at Zipadelli Field and move on to the Pod C final.

“We’re grinders,” Berlin head coach Gary Van Etten said. “We’re not a team that’s going to come out and explode on you. We find ways to grind out wins. I love our guys. They find ways to get it done. They just don’t give up. I hate using clichés, but it’s not over until the fat lady sings, and we keep her quiet for a little while.”

“We’re going to get a bunt down or a stolen base or walk, you name it - whatever we need to do to get it done,” Van Etten said of his team’s approach. “Close games like this, we have teams right where we want them.”

The star of the day for Berlin was starting pitcher Camden Murphy. In a complete game effort, Murphy gave up six hits and issued four walks.

Van Etten admitted that it “wasn’t his best stuff,” but the sophomore hurler found ways to get big outs when he needed them.

“I was off [at the] start for sure,” Murphy said. “Whenever I was down in the count, I had to just find a way to get that strike and pitch to contact to get the outs that I needed.”

The defense was also key to holding the Moosup attack at bay. Two runners were tagged out at home plate, once in the first inning on a throw from Fanelli in center field and the other in the fourth inning from Murphy. Fanelli also made a diving catch in the fifth inning that clearly brought life to the Berlin dugout.

“All year, it has been great,” Murphy said of the defense behind him. “Whenever I needed an out, they got the out for me.”

Berlin will face Ellington in Wednesday’s pod finale, the team that beat them on Sunday to force them into the losers’ bracket.

Berlin will send junior Adam Bilinski to start on the mound in the first game, needing to win twice in order to win the pod and move on to the Super Regional round.

“I would never count our guys out,” Van Etten said. “Are we the underdog on paper? Absolutely we are. They’ve got some big guys [on Ellington] and they’re a great team. But it’s the size of the fight in the dog, so we will see what happens.”