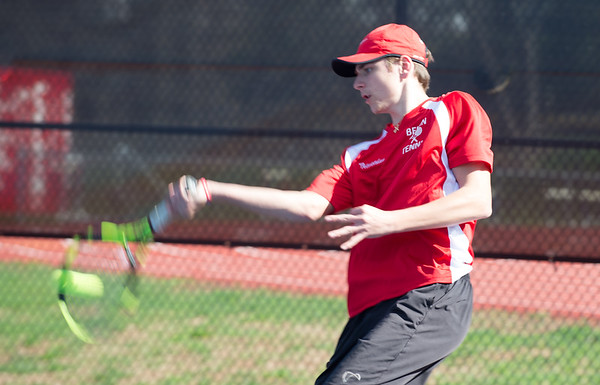 BERLIN - Berlin boys tennis head coach Mike Flannery was in constant motion on Tuesday afternoon, pacing across all six courts at Berlin High School to offer equal support and guidance to each player he had competing against Bristol Eastern.

The first-year head coach doesn’t let a set pass without offering a chant of encouragement to his players, something the Redcoats have taken notice of as Flannery eases into his first season at the helm.

While the experience is new for Trevethan, the team’s leader on the court and in the locker room, the change is a welcomed one.

“It’s definitely different [than in the past], but things have gone well,” Trevethan said. “I like his coaching style. He’s doing a good job so far.”

Flannery’s job may not be reflected in Berlin’s current record, especially after losing to Bristol Eastern on Tuesday for the first time since 2012, and then to Southington on Wednesday, but Flannery faced a number of challenges when he arrived aside from coaching a new group for the first time. Not only was Flannery new to Berlin tennis, almost half of his roster was.

“Out of our 12 players, five have never played before,” Flannery explained. “It’s a matter of teaching the kids and getting the players to keep playing. The more you hit the ball, the better you get.”

While dealing with a smaller roster with limited experience has made for a tough going through the first two weeks of the Redcoats’ season, Flannery wouldn’t change anything about his first matches as head coach. Watching the growth of a team largely new to the sport has been fulfilling enough to make any early losses worth it.

“I’m loving it and the kids are receptive,” Flannery said. “They’re responding to my coaching and listening. That in itself is making me very happy. You want to have kids that are coachable. That’s key.”

While Flannery counts on Trevethan to help lead the inexperienced group that even includes first-year upperclassmen like John Addamo, the core of four freshmen have turned to Flannery for guidance, as the player-coach relationship has benefited from both being in similar, unfamiliar places.

The large overturn on Berlin’s roster has brought different expectations for Flannery in his first season, at least in the early going. At this point, wins are considered a luxury, while the real focus is on grooming a large amount of the roster that hadn’t picked up a tennis racket until Flannery arrived to coach the Redcoats. He already sees the progress, which leaves him hopeful for the rest of the season.

“By the end of the year, we’ll be a much better team,” Flannery said. “We’ll see what happens. But I’d like to grow the team and have more players next year.”

For now, Flannery will work with what he has. The roster may be thin in numbers and experience, and while Flannery is new to the team, he’s not new to the sport, and he knows ability when he sees it. His consistent calls of encouragement to his players on the court are not just a gag. He believes in their trajectory.

“I think we’re going to be OK,” Flannery said. “We just have to keep plugging away and we’ll be fine.”