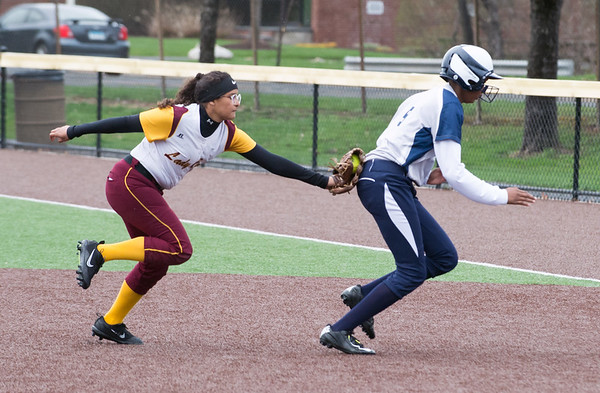 New Britain softball defeated Hartford Public at Chesley Park on a windy and rainy Monday afternoon. Josleen Rivera (1) tags the Hartford runner out as she chases her back to first. Wesley Bunnell | Staff Buy this photo
Published on Tuesday, 23 April 2019 21:31
Written by RYAN CHICHESTER

FARMINGTON - Josleen Rivera did all she could in the circle to put the New Britain softball team in position to win on Tuesday, allowing just two hits over seven innings while striking out seven, but the pitcher in the opposite dugout was even better.

Farmington’s Anna Mihalek allowed just two runs on two hits while striking out 15 Hurricanes, as New Britain committed five errors in the field to give the Indians all the run support they would need behind their dealing ace.

“She was amazing,” New Britain head coach Joel Simmone said of Mihalek. “We just couldn’t make any plays. It would have been quite a win, but if you don’t make plays, you can’t win.”

Both runs scored for Farmington were unearned, as a dropped fly ball in left field and two errors at shortstop doomed the Hurricanes in the pitcher’s duel.

Goodwin Tech 23, Whitney Tech 15: A six-run first inning sent the Gladiators on their way to a monster day at the plate, particularly junior Val Ramirez, who finished a perfect 6-for-6 at the plate, including two doubles and a triple.

Bianca Olivo provided the other big bat for Goodwin Tech, going 4-for-5 with a home run to pace the 30-hit avalanche.

Newington 4, Avon 1: A three-run first inning was all the Indians needed on Tuesday, as Mike Sobolowski and Ethan Errera combined to strike out nine Avon batters in the one-run effort.

“What they did best was limit the damage Avon could do and not allow anything big to develop,” Newington head coach Ben Alaimo said. “The one run they scored was unearned on a miscue in the outfield.”

Zack Nakonechny went 2-for-3 at the plate for the Indians, while Anthony DeBlasio drove in two runs in the balanced victory.

“It’s not the same guy every game,” Alaimo said. “It seems to be someone else every game that gets something done. It’s a number of contributions.”

Southington 4, Notre Dame- West Haven 3: Knotted in a 3-3 tie in the top of the seventh, the Blue Knights rode the heroic bat of Andrew Paradis to victory on Tuesday afternoon.

Paradis stepped in with two outs and drove in Jake DelMonte for his second his and RBI of the game to propel the Blue Knights to 7-1 on the season.

Jason Krar picked up the win on the mound, and held Notre Dame at three runs while Southington chipped away with seven total hits, none of which were for extra bases.

Berlin 14, South Windsor 0: Three different Redcoats recorded hat tricks in a rout of South Windsor on Tuesday, as Mark Bednarczyk, Luke Wininger and Mike DeMaio all found the back of the net three times in the lopsided victory.

On the other end, Sebby Fusco stopped eight shots in net for Berlin to record his third shutout of the season.

Luke Baretta added two goals for the Redcoats, who held a commanding 10-0 lead at halftime.

Southington 7, New Britain 0: The Blue Knights continued their season of dominance on Tuesday afternoon, sweeping the Hurricanes 7-0 to move to 6-0 on the year. Of those six wins, five have come via 7-0 scores.

Abby Murphy set the tone in first singles with a dominant 6-1, 6-0 win over JuJu Oliver, while Chantelle Gimenez battled through a hard-fought set with New Britain’s Jenny Ketkeoasny and won 2-6, 7-5, 10-8.

Southington 6, Newington 1: The Blue Knights continued their torrid start to the season with a dominant win over the Indians on Tuesday.

Newington’s Matt Utter defeated Marek Kryzonski in second doubles for the Indians’ lone victory of the afternoon, but from there, it was all Southington.

“Our boys played well,” Newington head coach Don Lukowski said. “Southington is a great team. I’m pleased with Matt Utter, he played well today and kept us from getting swept.”

Matt Balaoing won the first singles match over Sean Davis 6-0, 6-2 to get the Blue Knights rolling, as they have been all season so far.

Goodwin Tech 257, Kaynor Tech 261: The Gladiators may not have claimed the medal winner on Tuesday, but their overall performance was enough to take down Kaynor Tech thanks to a balanced effort.

John Mader finished with a top score of 52, but Goodwin Tech’s Julien Stepien came in close behind with a 58, while Christian Molina shot a 62. Xavier Irizarry rounded out the Gladiators’ top three with a score of 64.

Plainville 216, Platt 266: The Blue Devils stuck to their winning ways on Tuesday thanks to a stellar performance from Jacob Deschaine, who claimed the match medal with a score of 46.

Mike Melninkaitis finished in second for Plainville with a 52, and teammate Allen Nilson followed close behind with a 53. R.J. Bradley rounded out the Blue Devils’ top four with a score of 65.

Berlin 81, Bristol Eastern 69: Alex Halkias shined once again for the Redcoats, who took down the Lancers on Tuesday for their second win of the young season.

Halkias was a triple winner, claiming the 100m, 200m and the long jump. Mike Parzych was the 1600m and 3200m, while Andrew Brochu won the javelin while breaking his personal record.

Eastern received wins from Joe Harden, who won the 400m, and Jake Wozinicki, who took the high hurdles and the 300m hurdles.

Berlin 90, Bristol Eastern 51: The Redcoats remained undefeated with a win over the Lancers on Tuesday thanks to sophomore Noelle Konior, who recorded a double win in the 100m and 200m.

Megan Perrotta finished in first for Berlin in the 1600m, while Madison Monroe took first in the 800m, as the pair of seniors helped lead the Redcoats to their third victory of the year.

Newington 84, New Britain 56: Raven Symone-Jarrett was a triple winner for the Hurricanes on Tuesday, but it wasn’t enough to overcome a strong group effort from the Indians.

Jarrett took first in the 100 and 300m hurdles as well as the high jump, while Rosalyn Smith won the long and triple jump. The 4x100 relay team of Jarrett, Smith, Stella Ofei and Treanaliz Maestri finished in first place for New Britain.