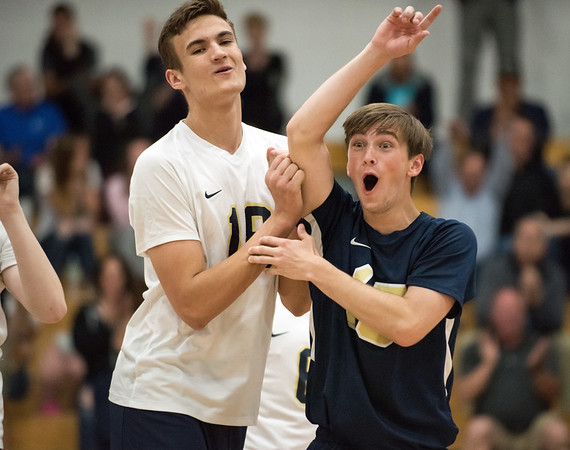 NEWINGTON - In its last tune-up before taking on a two-time defending Massachusetts state champion in Westfield on Monday, the Newington boys volleyball team showed it was ready for the challenge ahead.

Leonel Caceres dished out 33 assists, while Louis Egbuna led the team with 13 kills. Collin Liedke paced Newington in the digs department with 12, while sophomore Jocab Baclawski added eight kills in the Indians’ second sweep in a row.

Recording a sweep will be awfully tough next week, when Newington hosts Westfield before traveling to Southington, which claimed the only win against the Indians so far this season.

“We look forward to closing out the regular season Monday and Tuesday against some strong opponents,” head coach Curt Burns said.

Plainville 219, Maloney 228: The Blue Devils took on Maloney for the second time in as many days, and came away with another win on Friday.

Jacob Deschaine claimed the medal for Plainville with a score of 48, followed closely behind by teammate Mike Melninkaitis, who shot a 51 on the day. Allan Nilson and R.J. Bradley rounded out the Blue Devils top finishers with scores of 58 and 62, respectively.

Southington 7, Windsor 0: The Blue Knights got back on track after a loss to Newington on Thursday, sweeping Windsor 7-0 on Friday behind a number of dominant performances, particularly in doubles.

All three Southington doubles teams secured 6-0, 6-0 wins, while Riley Tindall cruised to a 6-0, 6-1 win in third singles. Alina Rivera picked up where Tindall left off in fourth doubles, earning a 6-2, 6-0 win.

The doubles onslaught was led by the first team of Kate Hardy and Isa Miani.

After a loss to Notre Dame-West Haven earlier this week, goals have come in bunches for the Berlin boys lacrosse team.

A 12-4 win for the Redcoats on Friday against Fitch marked 30 goals scored in the past two games for the team, and it took a wealth of multi-goal performances to get it done.

Brian Formica, Luke Baretta, TJ Hebert and Luke Wininger all found the back of the net twice for Berlin, while goaltender Sebby Fusco stopped seven shots to help the Redcoats maintain a comfortable lead. Berlin’s offense peppered Fitch goalie Trey Johnson all game, as Johnson came up with 17 stops.

Berlin 1, New Britain 0: A large crowd was on hand on Friday night at Beehive Stadium, and they witnessed a thriller, as the visiting Redcoats barely escaped the Hurricanes.

Adam Bilinski and Chris Gibbs battled through a pitcher’s duel, and a lone run in the fourth by Berlin proved to be the difference.

“It was a great game,” New Britain head coach Roberto Mercado said. “Gibbs pitched a great game for us. Our defense played outstanding. We just couldn’t get a big hit when we needed to.”

The lone extra base hit of the game came off the bat of the Redcoats’ Jeff Kuzoian, to help Berlin improve to 14-1 on the season.

East Catholic 4, Southington 0: For just the second time this season, an opponent managed to shut out the Blue Knights.

Anthony Mozzicato tossed a complete game three-hitter for East Catholic, striking out six without issuing a walk. A double by Jake Neuman was the lone extra base hit for Southington.

Ryan Henderson held East Catholic scoreless through three innings, but a run in the fourth proved to be all Mozzicato would need, as the Blue Knights dropped just their third game of the season.