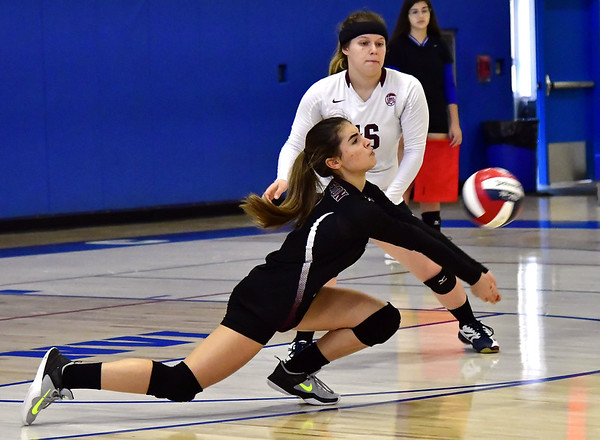 ENFIELD - Following a tough loss against HMTCA, Innovation girls volleyball coach Matt Lance wanted to see how his Ravens would respond on the road on Monday against Civic Leadership.

Lance walked away from the match pleased with the effort, as Innovation picked up a clean sweep of Civic Leadership (25-20, 25-13, 25-18) to get back in the win column.

“I thought we came out a little slow but after that our play became much cleaner,” Lance said. “It was nice to see them go out there and rebound after what was probably our toughest loss of the season.”

Molly Corcoran recorded 19 assists and 10 digs in the win, while Keshliani Hidalgo led the way with eight kills and five service aces. Akylah DaCosta added another seven kills to help the Ravens leave Friday’s loss behind them.

New Britain 3, Rocky Hill 0: The Hurricanes took care of business on the road against Rocky Hill, earning a sweep (25-23, 25-18, 25-16) to move to within one win of qualifying for the state tournament.

Brooke Cooney picked up nine kills, 15 assists, six digs and six service aces in an all-around dominant effort, while Mackenzie Coppola racked up 27 assists. Kayli Garcia and Veronika Gorski each had 10 kills in the win.

Southington 95, Farmington 89: The Blue Knights continued to roll on Monday, moving to a perfect 5-0 on the season with a narrow win over Farmington.

Andie Nadeau was a double winner, taking first in the 200 and 500 freestyle events, as was Gianni Perugini (50 and 100 freestyle) and Meghan Hammarlund (100 fly and 100 backstroke).

Nadeau and Perugini was part of the first place 200 freestyle relay team with Sarah Meade and Emma Jekubovich, while Hammarlund helped the 200 medley relay team to victory with Meade, Jenna Famigletti and Maddie Symecko.

Conard 96, Berlin 79: The Redcoats suffered their first loss of the season on Monday, falling to Conard in the team’s conference opener.

“Conard is a strong team,” head coach Andrea Gallo said. “We swam well, but they have a lot of speed.”

Plainville 1, Lewis Millls 0: Patrick Gryczewski broke a scoreless tie midway through the second half, and the Blue Devils defense held on the rest of the way to grab the victory over Lewis Mills on Monday afternoon.

Brennan Staubley picked up four saves in net to record the shutout, while the Plainville scoring attack fired 14 shots at Lewis Mills goalkeeper Ryan Mayes, but needed just the one from Gryczewski to get through and get the Blue Devils the win.

Cooper Burdette was credited with the assist on Marek’s goal, while Gio Cuevas picked up the lone score for the Lions.

Nick Cox made five saves for the Indians, and Xander Ford chipped in two.

Hale Ray 6, Innovation 1: Ravens goalkeeper Te’ijah Roberts was peppered with 16 shots on net in Monday’s loss to Hale Ray, and the Innovation offense came out slow and faced a 3-1 deficit by halftime in a lopsided loss.

The Ravens managed just three shots on net, but one got past thanks to a goal from Alice Bidoae. Kaeley O’Connell picked up the assist on Innovation’s lone tally of the day.

Goodwin Tech 7, Grasso Tech 0: The Gladiators stormed out of the gate on Monday and never relented, pounding 15 shots on net in a dominant 7-1 victory.

Ericka Aponte picked up two goals in the win, while Faith Chambers, Tatiana Ortiz, Desaraya Trusty, Nicole Tirado and Asia Vibert all found the back of the net. Trusty also added an assist to her afternoon.