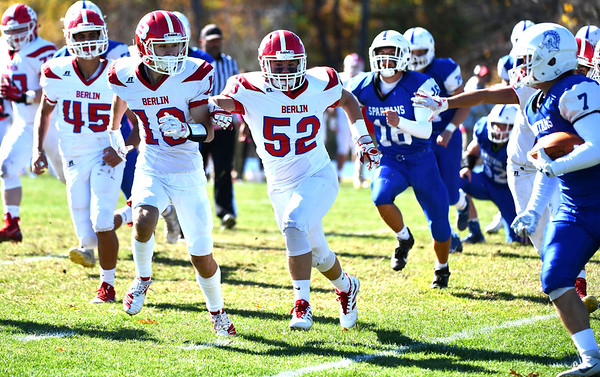 His Redcoats were clinging to a 7-0 lead on Saturday afternoon at Lewis Mills, but a pair of turnovers spoiled what could have been a dominant first half. Instead, his defense was asked to do its usual work of controlling the line of scrimmage and keeping the undefeated Spartans off the scoreboard.

The defense responded in kind with four forced turnovers in the first half alone, but the scoreboard didn’t reflect such dominance.

It was a familiar sight for Aresimowicz, who has come to realize that with a team decimated by injury and packed with underclassmen and first-year starters, some in roles they hadn’t played before, this was the type of gritty battle Berlin would likely have to overcome on a weekly basis.

“I told the kids for the rest of the year that every game is going to be a grind,” Aresimowicz said. “If we keep making mistakes, we can be in a tough situation that we don’t need to be in.”

The Redcoats’ current style of overcoming mistakes and inexperience with a stingy defense and resilient offense may be stressful on the coaching staff, but a 4-1 record after losing two starters for the year on opening night (Zach Hrubiec and Anthony Undercuffler) and another one two weeks later (Adam Liberda) shows a team that has weathered its share of adversity.

It seems to face more trials each game, like the two fumbles by running back and punt returner Johnny McGeever deep in Lewis Mills territory in the first quarter on Saturday, but it always seems to do just enough to overcome them, like when McGeever collected himself to punch in a pair of touchdowns and make sure the Redcoats walked away with a win.

“Ultimately, it’s our goal to win every game we play, but when you’re starting so many young kids, you’re going to have those type of mistakes and you just have to get on them or give them a hug, scream at them or give them a high five,” Aresimowicz explained. “It’s a balance. Luckily, we have really good coaches and really good kids that can take the tough love and bounce right back. That’s what you hope for in these kids.”

Aside from a 41-0 blowout win over a small and struggling Bulkeley program in Week 2, Saturday’s grind-it-out victory has been the norm for Berlin.

With exception to the rout over the Bulldogs, the Redcoats’ other four contests have been decided by an average of 10 points, with Berlin’s offense never scoring more than three touchdowns.

With a first-year starter at quarterback and two of their top running backs out for the year, the Redcoats have been relying heavily on their defense to keep the team in games, and so far, it’s working, even if it doesn’t always look pretty.

It’s not the most desirable method of winning ballgames, where an unfavorable bounce or one mistake at an untimely point in the game could change the outcome, but it’s the one the Redcoats need to settle for at this point in the season.

Given who they’ve lost on both sides of the ball and the youth that has been called upon to replace them, it may be their only way of winning right now. But as Berlin has said since the season (and the injuries) began, all that matters is what reads on the final scoreboard, not what led to the final outcome.

“It’s tough losing two of our best players, but nobody is feeling bad for us,” linebacker Danny Lynch said. “Everyone is coming for us, and we’ll play football any type of way, as long as Berlin gets a win … the best type of way to play football is to win football games. That’s our philosophy.”