Football Preview: Berlin getting ready to face East Catholic and its unconventional offense 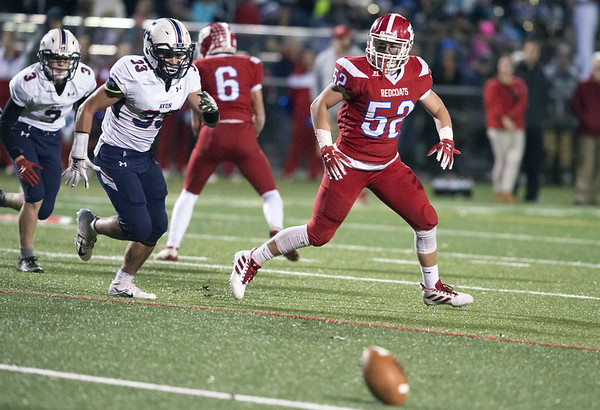 Still, the unorthodox offense presents a unique challenge each time the Redcoats meet East Catholic, which they will do on the road on Friday night. The Eagles will pack the backfield with two wing backs, a fullback and the quarterback to create as much deception as possible before running through an open hole in the defensive front.

Aresimowicz has seen it many times when matched up against Calande, who has written a book about the offensive scheme along with selling a number of DVDs providing visual instruction, but his players have to adjust to it each season, especially those who weren’t with the team a year ago.

“It’s assignment football,” Aresimowicz said. “If you fall asleep and don’t fill your gap, they could pick up big yards. They’ve struggled for wins, but you can never fall asleep on them.”

Berlin (6-1) has spent the week preparing for this unique assignment, with special instruction given to the team’s defensive front, which has been the backbone of the team and has still allowed no more than two touchdowns in a game this season. From the defensive line to the linebacker corps, Aresimowicz’s defensive unit will have to be mentally sharp to keep the Eagles’ running game stagnant on Friday.

In recent history, the Redcoats have fared just fine when going up against East Catholic’s Double Wing. Last year, after playing its season opener on Saturday before quickly turning over to play the Eagles the following Thursday, Berlin rolled to a 50-0 win, effectively clipping the Double Wing. Through their last three games against East Catholic, the Redcoats have allowed just eight total points, and all three wins have been in blowout fashion.

Despite a proven track record, Berlin isn’t taking any chances and is studying up on where to be on the field so it will continue to have success against Calande’s unique scheme.

“We don’t face something like this all year,” D’Amore said. “This offense can shake us up, so we have to stay focused. It’s difficult to get into, because we’re used to paying attention to the outside. Not everyone is packed in and the defensive line has to make sure they can take out as many people as possible so us linebackers can fill in and get through.”

Previous teams on East Catholic’s schedule haven’t seemed to have much of a problem against the Double Wing. Through their first six games, which all resulted in losses, the Eagles scored no more than 18 points in a game, and finally broke that streak with a 51-0 rout of Bulkeley last week, while also trying out some more traditional offensive plays.

“We watched the film from their last game and they passed it a lot more,” Aresimowicz said. “So we have to watch for that.”

East Catholic’s passing attack could have been an anomaly against a Bulldogs team that has allowed at least 40 points in every game this season, including against Berlin. The Eagles are averaging less than 17 receiving yards per game, as the Double Wing hardly sees the quarterback drop back to pass. Instead, they feed the ball to junior running backs Christopher Connelly, Michael O’Connor and Jack Barry, the latter who stuck out to Aresimowicz as the one who could be the toughest assignment for his defense.

“He runs the ball really well,” Aresimowicz said. “He hits the hole with a lot of speed. But they’ve had other pretty good athletes over the years.”

So far, Aresimowicz’s teams have been able to stop those athletes, and given how strong the Redcoats defense has looked this season, preparation will likely be the only obstacle that stands in the way of another win on Friday.

“We’re going to have to be on our toes,” Aresimowicz said. “But if our kids execute the defense that is being installed, I like our chances.”