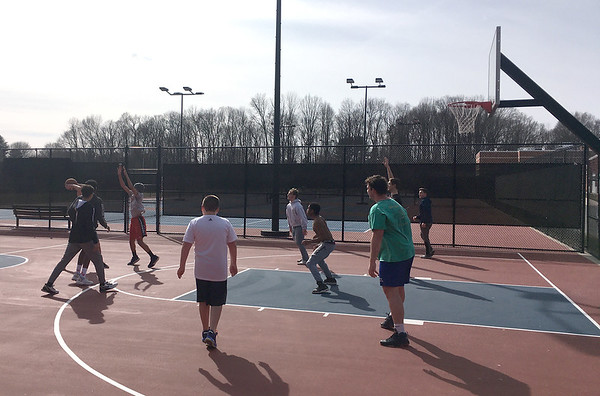 BERLIN - It’s been one week since the CIAC canceled all winter state tournaments as COVID-19 cases around the state and country continue to rise, but Berlin resident Matt Krajewski has played basketball every day this week.

Krajewski, along with a number of friends from the nearby area, have gathered at the outdoor courts outside Berlin High School regularly since the coronavirus outbreak led to events from high school to professional sports being canceled or postponed. The gym indoors is empty, and the doors to the high school are locked. But the outdoor courts remain busy, offering the local youth a sense of normalcy during unprecedented times where high school athletics are currently shut down.

“It’s very important [to me],” Krajewski said of his ability to still find a game of basketball at a time where sports around the world continue to pull the plug. “I’ve been here every day for the past week. It’s been fun. We used to have practice every day in the gym, and since we can’t do that anymore, I’m here. I know all these guys. It’s just fun to escape from the world in a sense. When we’re here, we’re not thinking about catching the virus or anything like that, it’s just a place to play and have fun and be away from all the other stuff that’s going on.”

Krajewski plays basketball and coed volleyball at CT River Academy, but neither of those is a current option. Still, the love for the sport doesn’t fade, and pickup games serve as a way to temporarily fill the void, while also staying prepared for when high school sports are brought back. Krajewski planned on competing in an All-Star basketball tournament in Boston, which was canceled, and hopes other opportunities arise as the coronavirus becomes more contained, hopefully sooner than later.

“It’s really hard, not just me, but for other athletes who want to have a future in basketball,” Krajewski said. “This was a lot of their last chances to shine and they can’t do that anymore. That’s why I’m here every day. I just still want to practice and hopefully another tournament will come up and I’ll be ready for it.”

For others, coming out to play every day isn’t about a potential future. It’s about the here and now, where all that’s needed is a temporary escape from a world that seems to alter by the hour, especially in sports, where a new league is shutting down or further delaying a season with each passing day.

For many that were outside on Monday, playing basketball was simply an opportunity to keep feeling like a kid while avoiding large crowds and doing their best to follow CDC guidelines, which now suggests eliminating gatherings that would bring more than 50 people. Outside Berlin High School, only 10 people were needed to start some 5-on-5 action and temporarily forget that most other forms of competition are currently prohibited.

“It’s the only way to get exercise that isn’t just running in your basement,” Berlin’s Ryan Salee said. “They can’t close everything and just expect people to stay in their house all day.”

Salee planned on competing in outdoor track for the Redcoats this season, but that is now up in the air as the CIAC awaits a Wednesday morning meeting to discuss the fate of the upcoming spring season, which expects to at least be postponed with schools closed until the end of the month.

The national pandemic has left many states and high school sports in the same position as Connecticut, and has also left some worried about coming out to try and find an escape through basketball or other sports. The courts outside Berlin High seemed to be an anomaly on Monday afternoon, as a number of parks in New Britain and most others in Berlin were empty, and some declined an invite to play with Krajewski and the rest of the crowd outside the high school.

“My good friend who’s here was really hesitant to come out here,” Krajewski said. “We just came from Westfarms and it was totally dead. We had to wear facemasks and everything. A lot of my friends are scared to come out here. I asked them to come play and they said they couldn’t come outside. I think it’s definitely affecting how everyone acts, even at a sports level. But the people that do come out, we just play basketball and have a good time.”

The group at the high school on Monday put their fears aside and played pickup like it was a normal weekday afternoon. Of course, instead of the acoustics of groaning school buses rolling out of the parking lot behind the court, there was nothing but silence. Still, it served as a way to feel like everything else was operating like normal.

“Pretty much everyone here lives nearby,” Berlin resident Tyler Alkas said. “So it’s nice to get together and just play.”