'It's a factory over there': Former Berlin football star Hrubiec will do postgrad season at Cheshire Academy 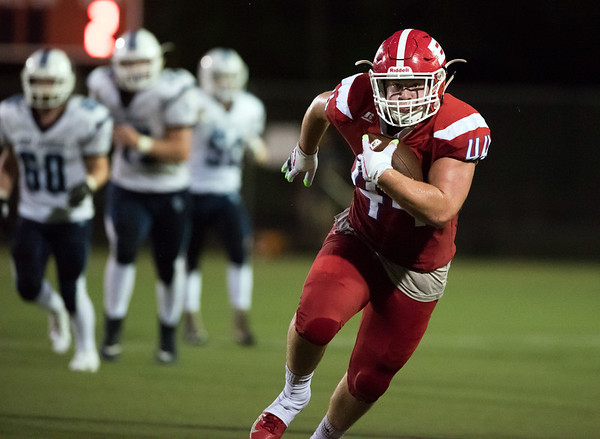 BERLIN - Former Berlin football star Zach Hrubiec announced on Monday his decision to play his postgrad season at Cheshire Academy, but in a way, this next step had been in the works since before Hrubiec ever put on a Redcoats uniform.

Cheshire Academy head coach David Dykeman and Hrubiec have been in contact since Hrubiec was in eighth grade, marking Monday’s announcement as the completion of a recruiting process that lasted an entire high school career, one which Hrubiec racked up three all-conference and two All-State selections as a dominant linebacker for Berlin.

“He said he spent more time recruiting me than he did dating his wife,” Hrubiec laughed when looking back on the eventual road to Cheshire Academy.

After more than four years, Dykeman has his man in Hrubiec, who will suit up for the Cats next season after reaching a state final with the Redcoats in 2018. Hrubiec broke his leg in the first game of the 2019 season and lost the majority of his senior campaign and after Dykeman kept in contact through Hrubiec’s recovery process, the next move in his football and academic career became clear.

“It was just the best situation for me for next year,” Hrubiec said. “When I got hurt, they reached out and were with me through the whole process and always had my back. I always appreciated that and when it came down to a decision, we had a heart-to-heart discussion and it just felt like home. It's a factory over there and they've done a great job.”

Monday’s move took as long as it did because of Hrubiec’s unshakeable desire to play for his hometown. Cheshire Academy quickly realized Hrubiec’s loyalty to Berlin and his quest to finish his four years as a Redcoat before taking the next step.

“Me and Cheshire have been in a relationship for a long time, but they knew my love for Berlin and what I stood for,” Hrubiec said. “They understood and throughout high school we stayed in touch. But staying at Berlin was the best decision because of the camaraderie here. You get a lot out of playing with the kids you've been with since you were younger and then you go to high school and develop together, and become a family. That's why I always wanted to stay. I understand why people leave ... but in my eyes, I had a mission and I wanted to finish it. I always wanted to be a Redcoat because I always watched them play. I wanted to finish my career there and I did. I feel like I had a really good run and as one chapter closes, another opens.”

If Hrubiec’s high school career, or at least his senior season, went according to plan, he may have never suited up for Cheshire Academy. The start of a collegiate career seemed like a growing probability until his injury against Tolland in Week 1 brought that progress to a halt. But that speed bump provided a detour, one Hrubiec still hopes leads to a college career, and he believes a year with the Cats will turn that hope into a reality.

“It's a great situation,” Hrubiec said. “It's good to take the next step and at Cheshire Academy they play against the best competition in New England, and that's where I want to be and who I want to go up against to maximize my potential. Playing at a school like that and know you're going to get in front of college coaches and you're going to have the opportunity to showcase your talent while getting better in the classroom is what makes it such a good situation. I think this is a good step before college and it will get me ready.”

In a way, Hrubiec has been ready for this upcoming season for the past five years. Playing out his career at Berlin was his top priority, but Dykeman and Cheshire Academy always lingered. Now, he will get to experience what Dykeman has been pitching to him since before high school.

“We've been talking about this since eighth grade and trying to make this happen, and for it to finally come full circle is really awesome,” Hrubiec said. “It was a lasting relationship and it was almost like how could I not go there? It's right down the road and is one of the best prep schools in New England and one of the best coaches. It was meant to be, and I'm happy to be a part of the Cheshire Academy family.”