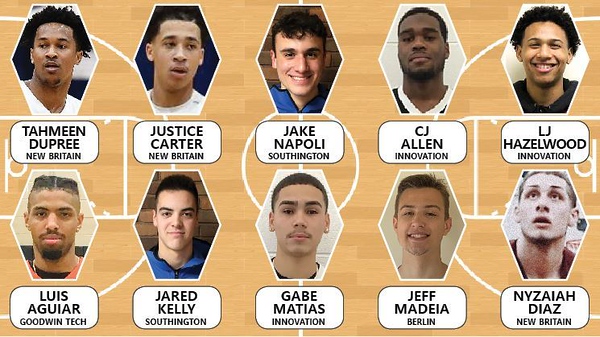 The boys basketball season was unexpectedly cut short, with a number of teams still alive in state tournament competition. Many of the players that led those respective squads into the state tournament make up this year’s All-Herald Team.

New Britain boasts two entries on our first team in Tahmeen Dupree and Justice Carter, while Innovation’s LJ Hazelwood and CJ Allen join the representatives from schools in the Hardware City. Southington’s Jared Kelly rounds out the first team, and teammate Jake Napoli is an entry on our second team. The Ravens boast a third entry as Gabe Matias makes the second team, as does Hurricanes senior Nyzaiah Diaz. Rounding out the second team is Berlin’s Jeff Madeia and Goodwin Tech’s Luis Aguiar.

New Britain was still fighting in the Division I state tournament after taking down Wilton in the first round, and the leading scorer in that victory was Dupree. An all-conference selection for the second straight season, Dupree was the team’s leading scorer and notched his 1,000th career point against the Warriors to help earn the program’s seventh state tournament win in Dupree’s varsity tenure.

“In order to get that [1,000th career point], you have to be somewhat consistent,” New Britain head coach Kurt Reis said. “I know he scored a couple his freshman year [playing against] Hartford Public when I was coaching there. He’s been consistent. There are probably times he could have played better, but to have a senior guard play varsity for three years is always a benefit.”

The only returning starter from last year’s state finalist squad, Dupree is still weighing his options for the next step of his basketball career, but leaves New Britain as one of the most accomplished players in recent school history, and ended it with a selection to the Connecticut High School Coaches Assosiation’s 45th annual All-Star Festival, thought the event was canceled.

“It means a lot,” Dupree said of his high school career. “Playing for this school for four years, you’ve gotta leave something, leave some kind of legacy. I left a legacy and that’s important.”

Dupree briefly transferred to Sacred Heart in Waterbury before returning to the Hurricanes last season, and teammate Carter came from there as well, and he earns a spot on this year’s elite group. Carter, a junior point guard, was an all-conference selection in his first season with New Britain, and showed his clutch gene when he hit a game-tying shot against Naugatuck with just four seconds left in regulation, the highlight of a season that reinforced his decision to play for his hometown.

Carter will be one of the team’s leaders next season with the departure of Dupree and forward Diaz, who was one of the team’s most efficient shooters from the field and the free throw line. Diaz’s defensive efforts also helped the Hurricanes contain 7-foot center Donovan Clingan in a win on the road against Bristol Central during the regular season.

Innovation didn’t get a chance to play a state tournament game this year after winning it all in 2019, but that’s because the team’s regular season success helped the Ravens earn a first-round bye in the Division II tournament. A big part of the team’s success was senior forward Hazelwood, who followed up his All-State junior season with another all-conference nod after leading Innovation with 13.5 points a game, and averaged a double-double thanks to his 10.9 rebounds per contest. Hazelwood’s last high school game was a memorable one, helping the Ravens win the CRAL Tournament championship with a win over Achievement First in the final.

Like Dupree, Hazelwood was selected the the CHSCA All-Star Festival, representing the only two area players to make that list of top seniors.

Hazelwood wasn’t the only Innovation player to average a double-double this season. Senior forward Allen stepped up after Lenny Okonya graduated last year, and averaged 12.1 points per game while leading the team with 11.5 rebounds per game. Allen’s productive season helped him earn a spot on the CRAL’s all-league second team, and was a monster on the glass in the team’s win in the CRAL Tournament semifinals, when he pulled down a program-record 27 rebounds.

“He’s usually the hardest working player on the floor,” Innovation head coach Matt Lance said of Allen. “He has grown tremendously, but his greatest growth was his ability to shake off his early mistakes. In the past, when games haven’t started off the way he has wanted to, it would affect his entire game. This year, he was able to mentally refocus and improve as the game continued.”

Matias, a junior guard, also made the second team, and rounds out the Raven’s representatives on our All-Herald squad. Matias was Innovation’s top 3-point threat, sinking 133 triples, by far the most on the team (the next highest mark was 62). Matias shot 35 percent from downtown, and will likely be the team’s top offensive target next season after playing a pivotal role for the 2019-20 Ravens.

“With the graduation of so many key scorers from last season’s team, we have needed players to step up and contribute offensively,” Lance said. “This is what Gabe was able to do this season. Although he is a phenomenal shooter, he’s at his best when he is aggressive and gets to the rim when it is available. When he takes high quality threes, he can really score in loads.”

Southington reached the state tournament this year behind two of its top seniors in Kelly and Napoli, who represented a productive backcourt duo for the Blue Knights. Kelly, the team’s top scorer, made the all-conference team and highlighted his season with a 30-point game against Manchester during the regular season. Napoli added 22 in that close game with the Red Hawks, and also reached the 20-point mark in a game against Conard earlier in the regular season to help Southington to a 10-10 finish.

Berlin was expected to be in rebuild mode after losing its top three scorers from last year’s state tournament team, but the Redcoats still made a push for the postseason thanks to the play of Madeia. The team’s top scorer, Madeia earned an all-conference nod while also dominating on the boards, and he showed his dual threat ability when he dropped 31 points while grabbing 16 rebounds in a game against Manchester this season.

“During any given game he played all five positions for us,” Berlin head coach Mike Veneziano said of the versatile Madeia. “In the beginning of the year he was decisive with the ball at times, but his game evolved daily.”

Madeia was at the forefront of a lot of the Redcoats’ key victories this season. He dropped 14 points in a win over Plainville in the Rybczyk Tournament back in December, then scored a dozen in a victory over Bristol Eastern. One of Berlin’s most impressive victories of the year was against Innovation, when the Redcoats trailed by double digits before Madeia scored eight points in the third quarter to spark a comeback win, and Madeia finished with 20 points on the night.

Madeia was a force all season, averaging 15 points per game and eight rebounds, both of which led the team.

Rounding out our group is Goodwin Tech’s Aguiar, who helped lead the Gladiators to the state tournament and to the conference tournament championship game, where they nearly took down undefeated Prince Tech.

Aguiar scored 29 points and grabbed 10 rebounds in the team’s tournament-clinching win over Cheney Tech, and will be a tough piece to replace next season. The senior averaged 21 points per game and five assists, and nearly averaged a double-double, logging eight rebounds per contest.

Of the 10 selections to our two All-Herald teams, eight were named all-conference between the CCC, CRAL and CTC. Two were senior All-Stars and All-State talents, and seven were part of teams that finished the season with a winning record.