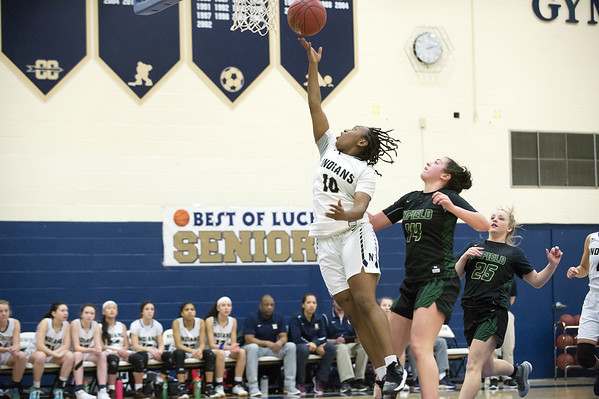 This yearâ€™s high school basketball champions are supposed to be two weeks into their new reign, but even though the coronavirus pandemic put an early stop to the winter season, the postseason awards are still coming.

The CHSCA All-State girls basketball teams were the latest individual recognitions to be announced, and three local players earned the honor. For Class L, they were Newingtonâ€™s Ashanti Frazier and St. Paulâ€™s Janessa Gonzalez along with Lyzi Litwinko of Berlin for Class MM.

A member of this yearâ€™s all-CCC team, Frazier led her team in scoring with 15.7 points per game in addition to 5.4 rebounds, 3.9 assists and 2.7 steals. The Indians finished with a 20-4 record and reached the quarterfinals of the Class L tournament as the third seed.

â€śI always felt like I should have got it in previous years, so I wasn't expecting it this year,â€ť Frazier said. â€śBut this was a nice way to make up for that and a better way to end the season.â€ť

Frazier surpassed the 1,000 career point milestone earlier this year and was one of the most proficient scorers in Newington history. She will move on to play college basketball at Division III Rhode Island College next year.

â€śI feel like I'm a pass-first point guard,â€ť Frazier said. â€śThat's how I play, I try to make my teammates better. But when it comes down to it, I can get the job done too. I'm the type of player that looks out for everyone, but if there needs to be a change, I'm willing and I can do it.â€ť

After earning All-State honors twice before in Class S and Class M, Gonzalez received statewide recognition as a senior in Class L by leading St. Paul to a 24-2 record and a spot in the quarterfinals of the state tournament.

Gonzalez can add this to her list of accomplishments for the year, which include NVL Player of the Year and leaving St. Paul as the second-leading scorer in program history. She will take the next steps in her basketball career as a member of Division II Bentley University.

â€śBeing named to the All-State team for the third time is a very honorable award and huge accomplishment,â€ť Gonzalez said. â€śI knew it was going to be a challenge this year after being moved up to Class L because Class L is comprised of good teams with a lot of great players. So I was very happy to see my name make the list along with some of my good friends from other teams as well.â€ť

Making her second All-State appearance, Litwinko was the leading scorer on a Redcoats team that qualified as the top seed for the Class MM state tournament with an 18-2 regular season record.

Litwinkoâ€™s 16.5 points per game were the most on her team and she also posted 6.2 rebounds and 3.4 assists. She shot 43 percent from the field this season and will leave Berlin as its all-time leading scorer before attending New Jersey Institute of Technology in the fall.

â€śIt's definitely a good feeling [to be named All-State],â€ť Litwinko said. â€śTwo years in a row, that's kind of the goal that I had always set, to be an All-State player. Reaching that two years in a row is an awesome feeling.â€ť