Remembering the best games between area teams in recent history 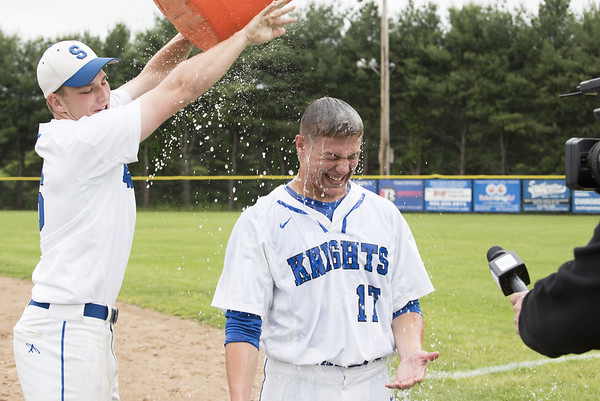 Southington defeated New Britain 4-3 in 11 innings on a walk off single by Billy Carr (17) in the continuation of a game suspended in the 10th inning due to rain on May 29th. Wesley Bunnell | Staff Buy this photo

The absence of live sports gives us a chance to continue looking back on historic athletes, teams and moments that have left a lasting mark on the local area.

Having just completed our series on the best area teams of all time across all local high school sports, let’s take a look at some of the most unforgettable games between area rivals in recent years. There are plenty of good ones to choose from, including epic overtime wins on the gridiron and walk-off wins on the diamond in the state tournament. Here are five of the most memorable classics from the past two years:

Talk about a game that had it all, from a go-ahead home run in extra innings to a pinch hit walk-off single that gave the Blue Knights a 4-3 win in 11 innings in the first round of the Class LL state tournament.

And that was only the half of it.

This classic bout saw an extended rain delay, a hidden ball trick and a close play at the plate as well in one of the best high school baseball games of the season.

With the No. 30 Hurricanes fighting to pick up a huge upset over No. 3 Southington, Chris Gibbs tried a hidden ball trick on the first play of action after a rain delay that lasted a full 24 hours. Gibbs faked a pickoff throw to second base, and his teammates on the field and in the dugout broke out into an artificial frenzy, but Blue Knights junior Jake Neuman didn’t budge. It looked like Neuman and the Blue Knights would be budged right out of the state tournament after New Britain’s Danniel Rivera blasted a solo home run in the top of the 11th to give the Hurricanes a 3-2 lead, but in the bottom half of the inning, Andrew Paradis, 0-for-5 on the day up to that point, tied the game with an RBI double before pinch hitter Billy Carr lined a single with two outs on an 0-2 pitch to win a game that instantly went down as an all-time classic.

“That was a heck of a baseball game,” Southington head coach Charlie Lembo said when it was all over. The Blue Knights took the momentum of that win all the way to a state final appearance.

New Britain had another classic bout with rival Berlin earlier in the season, losing a close 1-0 contest at an electric atmosphere inside Beehive Stadium.

The Hurricanes and Blue Knights had engaged in an unforgettable thriller just months before that clash on the diamond, this time on the gridiron. In a matchup of unbeaten teams, Southington completed a game-winning drive behind Jacob Drena to turn a 24-21 deficit into a thrilling 27-24 win at Veterans Stadium.

Southington’s game-winning drive lasted six plays and went 80 yards, and began with just 1 minute, 34 seconds left on the game clock. Tanner LaRosa scored the game-winner with 36 seconds left to give the Blue Knights their 10th straight win over the rival Hurricanes.

Still, that final drive was only part of the pandemonium, as this game saw three lead changes in the last five minutes of play, the second change coming on a touchdown from New Britain’s Tahje Yopp with 1:48 left in the game, but the Blue Knights had the final say.

“I hugged every single one of those guys after we walked off the field,” Drena said after completing the unforgettable drive.

Almost exactly one year after New Britain and Southington’s football classic, the Lancers and Rams put together one of the most memorable matches of their long-running rivalry. The end result was a thrilling 3-2 (30-32, 27-25, 25-19, 23-25, 15-13) win for undefeated Eastern, which avoided what would have been its first loss to its crosstown foe since 1995.

That potential first loss looked imminent when the Lancers were trailing 9-5 in the fifth set, but they came back to tie it at 11 apiece before finishing off one of their toughest wins of the season.

The match was back and forth from the start, with Central taking a 21-11 lead in the first set before Eastern rallied back to take a 25-24 lead, only to see the Rams rebound to take the first set. But the Lancers bounced back and eventually finished off one of the most thrilling matches of the season, not just in the local area.

“These type of games are things you’ll never forget when you grow up,” Bristol Central’s Peyton Greger said after the match.

The Bristol rivalry reached another peak in football this past Thanksgiving, in what was the only overtime game in the series’ history. The end result was a 34-32 victory for the Rams at Muzzy Field.

Central thought it might not need overtime when Victor Rosa scored with one minute left to put the Rams ahead by six, but the Lancers responded by marching 67 yards to tie the game and potentially take the lead, but the extra point was blocked by Central to save the game.

Edgar Santiago scored for Eastern to begin overtime on fourth down, but Rosa scored on the Rams’ first play from scrimmage, then ran in the conversion to win it for Central.

The Blue Knights are arguably the strongest softball program the state has ever seen, and put another stake on that claim last spring with another state title. But they were in trouble towards the end of the regular season against a strong Indians team that boasted a prolific starting pitcher in Dani Pantano. Behind Pantano, Newington built up a 6-2 lead at Southington in the fourth inning, but the Blue Knights rallied back to send the game into extra innings before waking it off with a 9-8 win in nine innings.

It was a tough loss for the Indians, but it was one of three local thrillers the school was involved in on that day. The baseball team took down New Britain with a 4-3 walk-off win, and the boys volleyball team battled into a decisive fifth set against Southington before coming up just short.