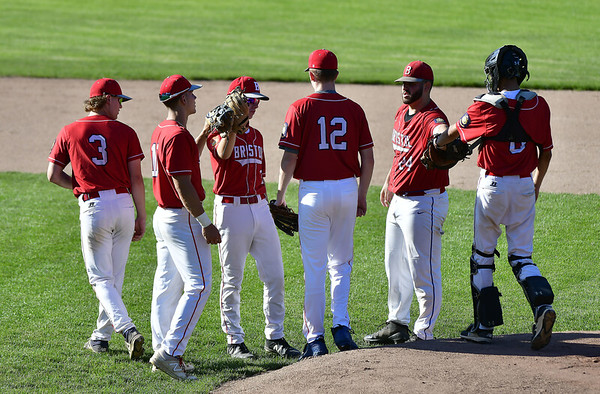 We are less than one week away from the conclusion of the CT Elite Baseball Associationā€™s regular season for local teams, and the league tournament is coming up fast, set to begin on Aug. 7.

With the regular season winding down on this abbreviated season for the new league, which was formed after American Legion removed sponsorships across the country, letā€™s take a look at where all three local teams stand in their march towards the postseason:

The most dominant local 19U team this summer has been Berlin, which continued its strong season with a 5-2 win over Bristol at Sage Park on Sunday afternoon, avenging an 8-1 loss earlier in the day. Berlin has benefited from a plethora of pitching arms, from aces like Adam Bilinsky and Cam Murphy to dynamic relievers like hard-throwing Gianni Fanelli, who closed out the victory over Bristol on Sunday.

Berlin is currently tops in Division I with a 15-5 record, and will close out its regular season at home on Tuesday evening against West Hartford, a team it has beaten twice already this year by a combined score of 20-5.

Berlinā€™s pitching has been deep and vital to its success, but the offense cannot be overlooked, having scored a total of 111 runs on the season heading into its final game, good for the best mark in all of Division I. That offensive output is second-most in the entire league, trailing only Wallingford over in Division II. With big bats like Paul Dā€™Amore and reliable contact hitters like Dan Veleas, Berlin will head into the postseason looking like the team to beat.

Bristol, which finished the season 1-2 against Berlin after Sundayā€™s double header, stayed above the .500 mark thanks to that split, and is currently 9-8 on the season, good for fifth place in Division I and 4.5 games back of Berlin. Bristol, like Berlin, has a very strong pitching staff this year, which was highlighted by Jagger Duquetteā€™s performance in game one of Sundayā€™s action in an 8-1 victory at Sage Park. Trevor Mays has also been a reliable arm for Bristol, going five strong innings in his last start against Avon last week. Collectively, Bristol has allowed just 55 runs this year, just one behind Cheshire for the lowest mark in the division, although Bristol has played the fewest games so far (17). What has prevented Bristol from joining Berlin near the top of the division has been the offense, which has scored the second-fewest total runs on the year (59). Bristol closes out the week with a tough slate, facing Meriden, Simsbury and Cheshire in consecutive days beginning Tuesday night. Bristol has gone 0-4 combined against those three teams in its last four matchups.

The team behind Bristol for the fewest runs scored on the season is Newington, which entered Tuesdayā€™s action at 8-10 after splitting a double header with Avon on Sunday. Newington has scored just 51 runs so far this season, but the pitching has been strong to keep the team sniffing .500. Mike Sobolewski has been an ace for Newington this summer, which he showed in his last start in a win over Bristol on Friday, where Sobolewski went 6.1 innings in a 3-2 victory.

Newington has also received pitching contributions from Dom Bukowski and Sam Dionne, while the offense has enjoyed the presence of catcher Gunnar Johnson, an All-State selection during the 2019 high school season. Newington is in action Tuesday night against Cheshire before a few days off in between its season finale against West Hartford at home on Aug 3.

Per the official league rules, two teams from Division I will qualify for the 8-team league tournament at the end of the season, meaning Berlin is likely the only local team heading to the postseason in the 19U circuit.

The CTEBA, which began in early July, appears to be heading for a successful finish after putting together a new league amid the Covid-19 outbreak. But the season didnā€™t come without its hiccups. Earlier this month, the league announced its first positive coronavirus test in an assistant coach on Hamdenā€™s 17U team (Hamden plays in Division II). The coach showed no symptoms, but as a precaution, Hamden shut down its 17U and 19U teams while it awaited guidance from the league, which canceled all remaining games for Hamden that weekend, as well as any team that had recently played Hamden. The team returned to play following the weekend, but two Hamden coaches remained in quarantine.

The CTEBA postseason is scheduled to wrap up no later than Aug. 9.