'CIAC is a group of people killing kids' dreams': Players, coaches react after learning they will be without 'real' football in fall 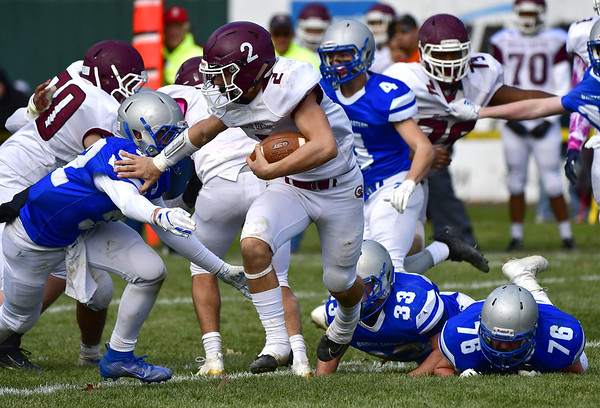 There wasn’t a day during the spring and summer Victor Rosa wasn’t working on some aspect of his game.

Bristol Central’s rising-junior headed over to a local field to do a variety of drills - shuttles, sprints, working on his backpedal - or tried to find different ways to lift weights. After having the final few weeks of the winter season and none of the spring to play sports, he wanted to make sure he was able to put on weight for the upcoming football season.

“There’s no other [football] league,” Rosa said. “Junior year is one of the most important years for going off to college. Talking with my family, it’s been in the back of my mind transferring out to a prep school so I could reclassify and get my film up.”

What Rosa faces, is a conundrum every other athlete in the state who plays football now has to deal with.

On Friday, the Connecticut Interscholastic Athletic Conference announced 11-on-11 football was no longer an option for the fall, citing the state’s Department of Health as “unlikely to support higher risk activities for the fall term.” Football is considered by the DPH to be a high-risk sport.

“Without DPH support, the CIAC cannot move forward with a full contact season as it would place superintendents and boards of education in the impossible position of acting against the recommendation of a state agency,” the CIAC said in a statement.

For many involved in football, the sport represents more than what happens on game day. As many players, coaches, administrators and parents often say, football teaches life lessons, builds lasting relationships and is an avenue for many to get to college, even if they won’t be playing. It’s an academic driving force.

“Football season for a lot of us is crucial,” Rosa said. “Some play to stay out of trouble. I play to go to college. I’ve wanted to go my entire life.”

The CIAC made its decision based on the recommendations, or lack of support as some would put it, from the DPH and it’s a move that has left many frustrated after a summer that saw a number of back-and-forth decisions about whether to play or not.

Haddam-Killingworth’s Kevin Cavrell began a petition pushing the CIAC to reverse its decision on 11-on-11 football. It already has more than 13,000 signatures and climbing.

“J Mac I never liked you on the field but I’ve never agreed [with] someone more,” responded Southington left tackle Ryan Andrews.

“From Day 1, everything has been called fluid, and if you have something that is so rigid, that’s not fluid,” Southington head coach Mike Drury said Friday. “Our sport specifically, we don’t have the option right now for independent leagues or club leagues. High-risk sports are being played in Connecticut right now, indoors and outdoors. Basketball, volleyball, lacrosse, hockey, this stuff is all being played right now. To me, there are still major inconsistencies with DPH.”

It’s now been 179 days and counting since the CIAC allowed a sanctioned high school sporting event. The CIAC canceled the remainder of the winter state tournaments in March and in May canceled the spring seasons. It wasn’t until last week the CIAC initially announced it was proceeding ahead with all sports.

But even before Friday, the DPH had recommended 11-on-11 football not happen on multiple occasions throughout the summer. In the middle of August, the state’s health organization proposed moving football, and girls volleyball, considered moderate-risk, to the spring. On Aug. 22, the DPH said it would consider allowing both sports in the fall if modifications were put in place, such as allowing 7-on-7 football or moving volleyball outdoors.

That back-and-forth and indecisiveness already led to a handful of players in Connecticut transferring out of state just to be able to play. The most notable was Bloomfield quarterback Daron Bryden.

“For everyone asking yes I am attending Washington High school in Oklahoma,” Bryden tweeted. “My senior year is very important to me and this decision was the best thing to be made. I’ve always had the drive to be great. I appreciate all the love and support. No interviews please #RespectMyDecision”

Volleyball will, it turns out, be played this fall as long as players and coaches wear masks. Full team practice and game schedules for soccer, field hockey, cross country and swimming will go on ahead as planned.

During a student-athletes rally Aug. 20, CIAC Executive Director Glenn Lungarini said the sports’ governing body could hold a combine or a 7-on-7 league, as was done in the summer, as a couple of possibilities. But a number of players and coaches have been against 7-on-7 football.

“To me 7-on-7 is preparing for football, it isn’t a part of football,” said Isaiah Boddie, who has been trying to navigate the previous guidelines related to the virus while trying to install his own system as New Britain’s first-year head coach.

Drury would rather see the season moved to 2021 than have a 7-on-7 league. Like Boddie, he’s against the possibility of having to exclude linemen and sees 7-on-7 as more of a training tool for players to learn his team’s system than anything else.

“Hopefully the CIAC can really step up for our players and have a spring season,” he said. “I know all of our players would love to do it.”

The CIAC, though, stated Aug. 24 spring football was out of its plan to play high school sports for the upcoming school year.

Other states, like Oklahoma, meanwhile, have already begun playing games even with higher covid-19 numbers than Connecticut (53,108 cases, according to the Center for Disease Control and Prevention).

“Do I think there should be football this season?” Boddie asked. “Absolutely. In the state of Connecticut, they’ve been playing AAU basketball and lacrosse and other high-risk sports, so why not football? I think not playing football will cause more harm than good in terms of kids’ mental makeup than not to play football. Our kids thrive off of structure and things to look forward to. For some kids, sports wakes them up in the morning and makes them go to class and do well in class. For them, it’s about doing well in school to play sports to get into college.”

Many coaches and players were in agreement before Friday’s announcement.

“I’m willing to risk it all to have a season this year,” Treyvon Daniel, a Bristol Eastern senior, had said. “All the hard work day in and day out just for it to be snatched from us isn’t fair. Six games or 10 games, I’ll be grateful to be able to step on the field with my brothers for one last ride. Every player graduating this year has something to prove. We don’t want it stripped.”

Brady Lafferty, Southington’s senior quarterback, added, “We’re the ones out there playing. AAU has been playing all summer; basketball, volleyball, baseball. I don’t see why football can’t be one of those sports.”

Parents had been just as supportive of having their children play this season, especially considering, as many have pointed out, where the state’s covid-19 numbers are compared to others.

“I think our parents recognize that athletics is a positive experience, but know we have to do it safely,” Southington Athletic Director Steve Risser said. “But all of our parent group meetings have been great...they’ve been very interactive. But I haven’t had any parent express that they don’t want their kid playing because the plan seems unsafe.”

“[Victor] did 7-on-7 through most of the summer with college athletes and high school kids that were going to college, and again, no issues,” said Glen Rosa, Victor Rosa’s father. “The kids are resilient and tough. There’s assumed risk in the sport of football, period. That’s why there’s an ambulance on the side of the field. I would guess if you asked all the kids, 99.9 percent of them want to play.”

And now that they won’t be able to play - at least 11-on-11 this fall - the players know there are trickledown effects of not just losing a season or their final high school one if they are a senior. This has implications regarding what they want to, or can do should they choose to continue to play at the collegiate level.

“A lot of coaches are making scholarship decisions based off this season,” Lafferty said. “A lot of kids, this might be their last opportunity to play if they don’t do a postgrad year or go to [junior college]. This is very important to get this season in so we can get that film out.”

Seeing a player in person is just as important to coaches. There are also a number of players who might not have gotten enough exposure early on during their high school careers or have had to sit and wait to play that need to put tape together of what they are able to do.

“The Class of 2021, I feel bad for,” said Central Connecticut State head football coach Ryan McCarthy, whose team was set for its season opener this weekend before the NEC decided to suspend all fall sports until at least Oct. 1. “Some states are playing and some are not. A lot of what we do is based on what you see in person. There has been no one-day prospect camps. Say there’s a camp at UConn or Boston College or UMass or wherever and you have an opportunity to evaluate them. They’re not in pads, so it’s not real football, but you lose the chance to see how the kids interact with coaches and how he competes. Can he handle those things? You want to make sure you get the right kid for your program, so it’s been impacted.”

CCSU generally draws its recruits from a five-hour radius from its New Britain campus. By the second National Signing Day, the Blue Devils had inked 20 incoming freshmen, eight of which were from Connecticut.

“We like to get as much information about a kid as we possibly can,” McCarthy said. “There’s a lot of really good tape out there, but you have to know about the kid too. Normally, we would be out watching games if we didn’t have a game ourselves.”

Now, that isn’t going to happen this fall - at least not padded football. And to many, it’s an unfortunate way for those involved that it came to such an abrupt ending, especially while other states are playing.

“The kids put so much into this,” Drury said. “They deserve to have a season.”

Ryan Chichester and Matt Hornick contributed to this report.