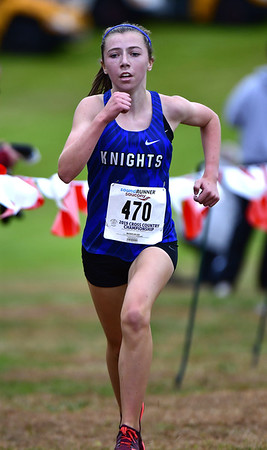 The cross country season, along with all other fall sports besides 11-on-11 football, begins Thurday, and multiple local teams will be returning runners that expect to once again be some of the best in the state this season.

It is still unknown what the postseason will look like, if there is any at all, but if there is, look for teams like Newington, Bristol Central and Southington to have runners that will shine on the big stage, while other teams like Berlin look to replace graduates who left behind careers that will be remembered forever.

Here is the outlook for each local team heading into the new season:

Outlook: After a great 2019, the boys team brings back a lot of strong runners for the 2020 season, including Nate DeAngelo, who finished seventh in Class L and 15th at the State Open last season.

“He is poised for a strong season and received a top-10 preseason ranking by Mile Split CT,” Stafford-Kirk said. “If we get any championship races, Nate will be challenging at the front in all of them.”

The girls return four senior varsity runners, including Popielarz, who was a city champ last year and finished 20th in Class L, but the rest of the squad is young and will look to keep Central among the best in the conference this year.

“Outside of our four senior varsity returnees, all our other runners are new and mostly young,” Stafford-Kirk said. “It will be interesting to see who steps up to fill the open varsity spots.”

Outlook: Both the boys and girls bring back two of their top runners in Seth Anderson and Avery Braccia, the latter being an all-conference selection and a 15th-place finisher at the Class MM state championships. The girls team came in eighth place overall at last year’s state meet, and will be looking to put together another solid season.

Outlook: The Hurricanes lost one of their top runners in Bookal, but while this group may lack experience, they still expect to start laying the foundation for what will be a successful program in the coming years.

“We have a lot of first-year runners this year, but they have been coming every day and giving 100 percent effort,” Kawecki said. “Looking forward to the start of the season and building their experience to be even more competitive next year.”

Outlook: The girls were dominant last year, but suffer a massive loss in 2020 with one of the program’s best runners ever in Juliana Cancellieri, a three-time All-State selection who graduated in June. Berlin also lost all-conference runner Audrey Jankovich, so it will rely on its returning all-conference runners in Claudia Jankovich and Megan Perrotta to lead the way this year.

The boys say goodbye to their top runner in Michael Parzych, who impressed with a fifth-place finish at last year’s Class MM meet, but they do bring back Ben Fisher, who came in 25th and was an all-conference winner. Nearly all of the team’s other runners that competed in states are coming back, which is a good sign for Berlin.

Outlook: The schedule will look different for the boys team this year, but the roster will have a similar feel after losing no runners from the roster the Blue Devils brought to the state championship meet last season.

“We have a nice balance of new and returning runners,” Berard said. “The kids are really looking forward to competing, even if it's with schools outside of our traditional division.”

The girls can’t say the same, as the Blue Devils lost six of the seven runners from their Class SS roster, and Berard joked that the first goal for this young and new team will be to not get lost at practice. But despite the overwhelming youth, he likes what he sees so far.

“We historically have had small girls teams and are glad this year to have enough girls to compete after losing so many to graduation,” Berard said. “We have four freshmen and a first-year senior on the team along with Emily. Once they start competing we should have a better understanding of where they stand in the conference. So far I'm thrilled with the strong work ethic and spirit of the girls team.”

Outlook: The boys lost arguably their top two runners in Penna, who now runs at Iona, and Riccio, who runs club at UConn, to graduation this year. So the returnees and newcomers will have to step it up, but Dachelet knows that even if it takes some time, that doesn’t mean this team won’t find its stride by the end of the shortened season.

“For many boys, it wasn’t the summer of training that we’d have hoped for and many are playing catch up to where they left off last season,” Dachelet said. “Last year’s team took until the end of the season to peak, so hopefully the same for this season.”

Meanwhile, the restructured 2020 season was a tough blow for all high school athletes, but the girls are really left wondering what could have been, as they were gearing up for a season they hoped would be especially memorable.

“This is by far the strongest ladies team Southington has ever had,” Dachelet said. “Had this been a normal year, I would have been disappointed that they wouldn’t advance to New Englads and also would have been a top team at Nike Cross Regionals.”

Still, Southington will carry its lofty goals into the unique season, hoping to go undefeated in dual meets, and find success in whatever format the CIAC comes up with.

“We’re hopeful that there will some sort of virtual CCC meet and even CT 5k,” Dachelet said. “Our goal would be top five on the ladies side.”

Outlook: The girls team is in good shape as it returns its top-three finishers from last year’s Class L state meet in Daha, Doyle and Harris, but the boys team is really set up for success with the return of Geisler, who came in second place at last year’s state meet and is quickly becoming one of the better distance runners the program has ever seen. What’s more, the boys team had another top-five finisher at states last year in Michael Bohlke, who came in right behind Geisler in third place, and he’ll be back for his junior season. This Newington team should be stacked at the top.

Outlook: The boys team had an incredible 2019 season, coming in second place at the Class S state championships behind first-place finisher Chris Deforest, who will be a massive loss for the Kangaroos in 2020. They also lose fourth-place finisher CJ Hart, meaning fellow top-20 finishers Nick Zappone and Nick Fusco will be heavily relied upon this season.

The girls team had two runners compete in states last year in Kaitlyn Deforest and Madeline Bell, and both will be back for this season. Deforest will have high expectations after coming in seventh place as a sophomore.

Outlook: The boys team loses its top runner from last year’s Class SS state meet in Aidan Reilly, while the girls suffer a big loss in the form of Kailyn Bielecki, who came in 11th place at last year’s Class S meet. Both teams have returning runners that competed in states last year as freshmen in Elizabeth Speaker and Collin Reilly, so keep an eye out on the trajectory of those two during this season and beyond.

Outlook: The girls team had no seniors on last year’s roster and have a junior in all-conference runner Carese Davis who set a personal best against University last season, finishing with a time of 27:15. The girls also return all-conference runners Nadia Joseph and Imane Fahmi, while the boys team is rebuilding and looking to get back to the level where it won the CRAL title in 2017.