CIAC delays start of winter season, will discuss new plan at next board meeting 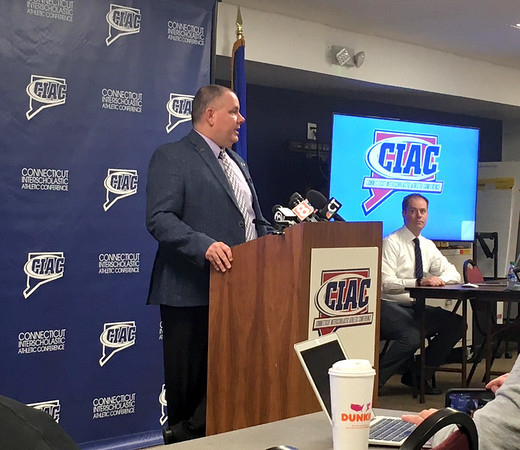 CHESHIRE — Practices for the winter high school sports season were scheduled to begin two weeks from this Saturday, but that date will now be pushed back.

The Connecticut Interscholastic Athletic Conference sent out an email to athletic directors stating the start of the winter sports season, originally scheduled for Nov. 21, would be delayed, according to GameTimeCT, and later made the announcement official through a statement on Twitter.

“The CIAC notified member schools this afternoon that the scheduled Nov. 21 start to the winter season has been postponed pending the review of forthcoming guidance from the CT Department of Public Health,” the CIAC announced on Thursday afternoon. “The DPH guidance will be reviewed and serve to inform the CIAC winter sports plan including any possible modifications to allow for safe participation.”

The CIAC had originally put together the framework for a season that would start regular season games on Dec. 7, with state tournaments running through Feb. 21. Those dates, as the CIAC made clear when this schedule was constructed last month, were strictly for scheduling purposes, and were not a confirmation the winter season would happen. Thursday’s news ensures the season won’t begin in early December, but hope remains to have a season in some form, as covid-19 cases continue to rise in Connecticut.

The CIAC was originally scheduled to hold a Board of Control meeting on Nov. 10 to discuss the winter sports season, but that meeting has now been pushed back to Nov. 17, as the board awaits guidance from the Department of Public Health, which is expected to release its guidance for winter sports in the near future.

“The CIAC anticipates an update by DPH on winter sports very soon,” Thursday’s email to athletic directors read. “The CIAC will consider a new start date for winter sports at its Nov. 17 board meeting.”

The CIAC leaned heavily on guidance from DPH for the fall sports season, which included girls volleyball players wearing masks during competition and the cancellation of full-contact football. The regular season for fall sports is ending Friday, but there have been hiccups related to covid-19, including Bristol Central soccer games being postponed at the start of the season, the St. Paul boys soccer team canceling its final two weeks of play due to a positive covid-19 test, and all New Britain sports canceling contests on Thursday and Friday after the school went to remote learning due to covid-19 cases at the high school. As cases remain on the rise, there is lingering concern indoor sports like ice hockey and wrestling will be difficult to pull off in a safe manner.

More will be revealed after the CIAC’s Board of Control meeting in less than two weeks. But for now, the winter season has been put on hold.