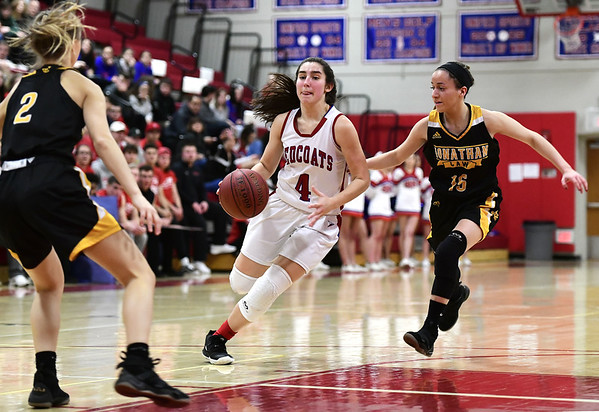 The year 2020, for high school sports and far beyond, was as unprecedented as they come.

Looking specifically at high school athletics in the local area and Connecticut, this year only had active competition for roughly four and a half months due to the coronavirus pandemic, which ended winter sports prior to the 2020 state tournament conclusions, wiped out spring sports entirely, cut the fall sports season in half (while football was pushed back to spring), and will end with the next winter sports campaign in question, delayed until at least Jan. 19.

Less games means less moments to choose from when trying to put together the best moments from 2020, but area teams and players still provided plenty of storylines that would have stood out even in a normal year.

Here are the top high school sports moments from 2020 in the New Britain area:

Former Berlin girls basketball star Lyzi Litwinko is currently making waves as one of the top freshman in the conference at Division I NJIT, but back in early February, she was rewriting the Redcoats’ history books.

On Feb. 3, Litwinko surpassed Kate Zarotney with the most career points in program history, logging point number 1,268 to become the top scorer Berlin has ever seen. Litwinko refused to make a spectacle of the accomplishment, as she was more concerned with finishing the game and beating Wethersfield, but the crowd took the time to acknowledge Litwinko’s accomplishment, who would go on to graduate as arguably the best player in program history.

Tahmeen Dupree ended his junior year as a member of the New Britain boys basketball team’s first state finalist group since 2002, and ended his senior year as one of the top scorers in school history, notching his 1,000th career point in the Hurricanes’ first-round win over Wilton in the Division I state tournament.

Dupree finished the game with 27 points to lead all scorers, and his name is now hanging with the rest of New Britain’s best on the school’s 1,000-point scorers banner. Unfortunately, the season was canceled after the win and Dupree wasn’t able to add to his career total.

On Jan. 16, Newington girls basketball senior Ashanti Frazier also reached the 1,000 point mark, putting home a tough layup against East Catholic in the second quarter before scoring a game-high 24 points to lead her team to a thrilling 50-49 victory over the previously unbeaten Eagles.

Frazier and Newington’s run toward a state title was stopped by the season’s cancellation, but the team appeared to be set up for one of its most successful runs in program history with Frazier leading the way.

Within a span of five minutes, the Southington wrestling team produced two State Open champions on Feb. 29. Ashley Reed won the first-ever CIAC Girls Invittional, claiming the 160-pound tournament title after pinning Montville’s Baylee Gagneir in the second round. Shortly after, Billy Carr secured a late takedown of Amity’s Simon Flaherty to take a 4-3 lead with six seconds left in the final round, and hung on to win the title.

Before Carr cemented himself as one of the best in the state, he was battling New Britain senior Isaiah Medina in the regular season finale on Feb. 13. Medina, who was dedicating his final season to his mother Ivette, was trying to finish off an undefeated regular season, and did so by beating Carr in an 11-6 decision to take down his toughest opponent of the season and complete his goal of getting through the regular season without a blemish.

Medina went on to take fifth at the State Open and secure a spot at the New England Championships.

The soccer season was much shorter than normal, delayed nearly a month due to covid and concluded without state tournaments, but All-State, All-New England and All-American winners were still named for 2020, and two local stars were included in all three.

Newington girls soccer senior Olivia Mullings and Plainville boys soccer senior Pat Gryczewski both earned All-American honors for the first time in their decorated careers, with Mullings becoming the first player in program history to be named among the best in the country.

Mullings battled injury through the entire season and was still able to turn in an All-American performance, while Gryczewski’s monster senior season helped finish his career with 42 goals and 26 assists. Thirteen of those helpers came in the 2020 season alone.

If there was a local team to be named as the most dominant squad of 2020, it would be hard to make an argument against the Southington girls cross country team. The Blue Knights staked their claim as one of the best in school history by competing in multiple national competitions while piling their names atop the best runners the program has ever seen.

Grace Michaud logged the best time in program history with a time of 18:35 at the CCC’s Region B championship race, and four other teammates now round out the top five runs in program history, with Jacqueline Izzo, Frenchie Riccio, Jessica Lombardo and Diane Pillsbury all now among the top five.

The 2020 fall sports season was truly unlike any other, but for the Goodwin Tech girls volleyball team, it was even more irregular. The Gladiators, coming off of a thrilling CTC conference tournament championship in 2019, were forced to merge with the CRAL after the CTC temporarily disbanded to satisfy travel limitations for its teams. But that didn’t stop Goodwin Tech, as the team went on to win the tournament title once again, beating Prince Tech (which also came over from the CTC) for the second straight year to win the CRAL championship, becoming the first team in program history to be crowned conference champs two years in a row.

Marc Wesoly announced his resignation as head coach of the New Britain girls basketball team shortly before what would have been the start of a normally scheduled season, and the school made a big splash with his replacement by bringing back former head coach Beryl Piper, who led the program to multiple state championships in the late 2000s and saw over the most successful stretch in team history. Piper, who retired as head coach of the CCSU women’s basketball team earlier this year, will be back in front of the Hurricanes bench when the season finally begins in late January, so long as the CIAC feels it is safe to play.

CANNON NAMED COACH OF THE YEAR

Just six months after undergoing surgery to remove his right leg and save his life from a rare form of cancer, Hall-Southington boys ice hockey head coach Brian Cannon was named the Division III Coach of the Year on March 2.

Cannon, diagnosed with Synovial Osteochondromatosis, a rare disease that causes calcified cartilage to form in the joints, was back behind the Warrior-Knights bench for the 2019-20 season and led the team to a 14-7-0 record, including a first-round win in the state tournament, and was slated to play in the quarterfinals before the state tournaments were canceled. Still, it was an incredible comeback story for Cannon after undergoing surgery in August before the season.

There were no state tournaments this year, but the Central Connecticut Conference still put together regional championships, and two girls soccer squads won those titles in Southington and Newington. The Blue Knights, who dominated all year, cruised past Lewis Mills in the Region B championship to cap off an undefeated season and help ease the pain of last year’s loss in the state championship match. Meanwhile, Newington battled through a thrilling bout with Wethersfield, which it lost to twice during the regular season, and came out on top to win the Region D title on penalty kicks. It was the perfect act of revenge for Newington over its rival.