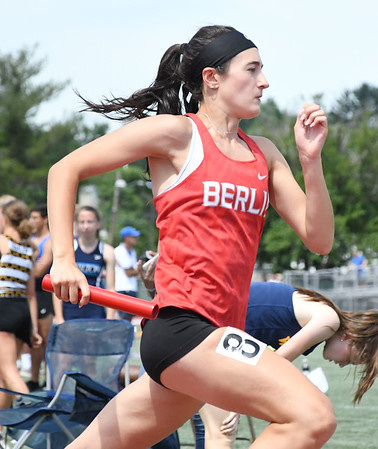 The Berlin Redcoats were well represented on the girls side of the 2021 CIAC State Open Track and Field meet Thursday, despite not closing the meet with a team score. Overall, Berlin was represented in 10 events, nine of which were for the girls.

Seniors Noelle Konior and Megan Perrotta posted admirable times in the 100 meters and 800 meters, respectively. Both finished outside the top-10, with Perrotta placing 11th and Konior clocking in at 22nd.

The time, despite the not-so-great placing for Konior, was the best time of the season for her and it came on the biggest stage.

In fact, she wasn’t alone. The 4x800 team which had Perrotta as the anchor clocked a season best by almost half a minute.

“Noelle ran her fastest time of the year in the 100 meters. Everybody else, they’ve been close, but they ran so well the last time that it was going to be tough to match that time today, even with a little better competition,” said girls head coach Steve Soucy. “Their fastest times going into the class meet was 10:17 for the 4x800, and they ran a 9:51. They dropped by 27 seconds, and to improve again, it’s very difficult.”

The 4x800 team of Jaden Paldino, Jenna Wenzel, Taylor Demarais and Perrotta had a time that put them in 11th overall.

The reliability of Perrotta and Konior has proved invaluable. Two of the more reliable runners for Berlin this season, Soucy said the presence of them has been important in keeping younger teammates prepared and ready.

“We definitely look at them to take the lead and to lead by example and to make sure they’re prepared for a race and ready to go,” said Soucy. “They’ve both, for the last four years they’ve been here, they’ve been in that position. They’re two of the people that I don’t really think about too much on if they’re going to be prepared - because they are. They’re very consistent with their preparation.”

A team that made much of its noise on the track also had competitors in the field, with Kristen Kozlowski battling in the high jump and triple jump.

In high jump, she faulted three straight times at 5 feet, but cleared 4-10 on her first try. The result netted her an 18th place finish in the state.

Konior competed in long jump, fouling her first attempt, and then jumping a best of 15-7.5 on her third try. The distance came in at 20th.

Mason Memery was the lone Berlin boy to participate in the 2021 CIAC State Open Track and Field meet.

In the long jump, Memery leapt a distance of 19-07, his second jump. He did not make the finals, and finished in 20th place.