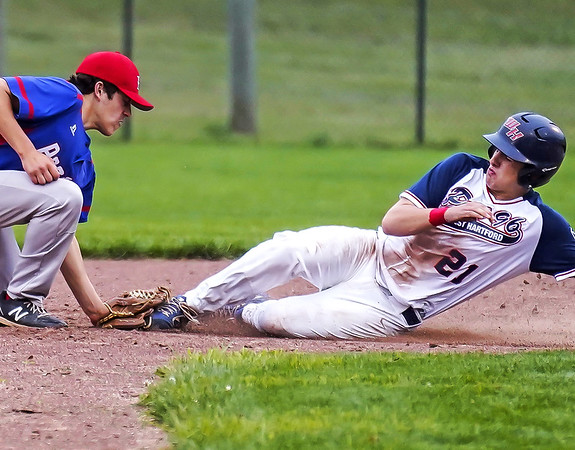 The Berlin Legion baseball team picked up its first win of the season in its 8-1 victory over first-place West Hartford on Tuesday at Zipadelli Field.

Berlin scored four runs in the seventh inning to pad its 4-1 lead after six innings, with a sacrifice fly from Patrick Lukens, an RBI single from Jonathan D’Amore and two bases-loaded walks from West Hartford.

The win snaps a nine-game losing streak for Berlin, while West Hartford falls to 8-3.

“They’re the best team in the league,” Berlin coach Gary Van Etten said. “We’ll take it anytime we can get it.”

Berlin hit the ball well in this one as it cracked seven hits, including two doubles. Garrett Fallon ripped an RBI double during the fifth inning to make it 3-1 Berlin, then Nick Spinali hit another one an inning later.

Cam Murphy threw 6 2/3 innings for the victors, allowing just one run on six hits and three walks while earning one strikeout. Matt Kozak struck out the final batter of the game in the bottom of the seventh to hand Berlin its long-awaited victory.

Murphy also drove in a critical run during the sixth inning with an RBI single up the middle.

“It’s nice to get a win,” Van Etten said. “Hopefully we’ll get another one this week.”

West Hartford took the 1-0 lead in the first inning, but Berlin proceeded to score eight unanswered runs over the next six innings.

A couple miscues from West Hartford allowed Berlin to take the lead, with a wild pitch and a fielding error granting Post 68 a single run each in the second and third innings.

Fallon’s RBI double and Murphy’s RBI single upped the advantage, before a four-spot in the final frame sent the Berlin faithful home happy.

“Our infield-outfield was terrible tonight and I kind of got on them and said ‘you can’t come to the ballpark and not be ready to play,’” Van Etten said. “One of the kids stepped up and said, we’ll be ready for the game. I said ‘okay, show me it, don’t tell me it’.

Prior to Tuesday’s contest, Berlin had not scored more than four runs through its first nine games.

Berlin (1-9) will look to keep the wins coming in its next game against Avon on Thursday at Sage Park at 7 p.m.