Berlin boys soccer says 'I think we're due,' as it makes a push for playoff berth 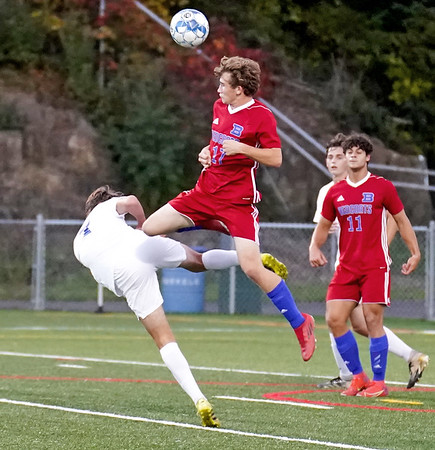 Berlin's Ryan Garrity (17) goes up and over the opposition for a header Tuesday night. | Dan Heary Buy this photo
Published on Wednesday, 13 October 2021 20:55
Written by RYAN AMES

BERLIN – The push for the playoffs is on for the Berlin boys soccer team after taking its third straight win Tuesday against Southington.

The Redcoats worked themselves out of a six-game winless streak with a 7-3 victory over New Britain on Oct. 5, and have since put themselves in a much better position to make a run for a postseason berth with an overall record of 4-4-2.

“I think we we’re due,” Berlin coach Sal Parafati said. “We had to fix the little things and play consistently and that's what we've been doing the last three games and it shows.”

In its 2-1 comeback win over the Blue Knights, Marco Marino was the hero for the Redcoats with two second half goals as Berlin pulled through in a playoff-like matchup. Neither team gave up much but the Redcoats took advantage of a couple of Southington breakdowns to earn the victory.

“I thought if we tied the game, we'd win it,” Parafati said. “If we could just score the first one, I thought we'd keep the momentum going and sure enough, that's what happened.

“I don't think much changed,” Parafati said regarding the second half. “I think we just kept playing our game and kept staying focused and kept putting them under pressure and kept forcing turnovers and we finished our chances.”

While the Redcoats' offense shined late, their defense kept the Blue Knights from generating momentum for most of the night. Save for William Schroeder's goal during the first half, Southington struggled to generate chances at the same clip as Berlin, especially during the final frame.

“[Schroeder] is a very solid player up front and I thought [we] did a great job marking him,” Parafati said. “In the first half he had an unbelievable goal from 30 yards out, so we tip the hat to him, but in the second half we were a little bit more aware.”

The Redcoats are looking to qualify for the Class L state tournament for the first time since 2017 when they earned the ninth seed with a 12-3 record.

Berlin won its first-round contest against Notre Dame-West Haven 3-0, but fell in the second round to Bethel, 2-1, in a double-overtime battle.

With six games left in the season, Berlin will likely have to win at least half of its remaining games to comfortably earn a playoff spot. The Redcoats will face East Catholic (five wins), Bristol Central (seven wins), Bloomfield, (one win), Plainville (five wins) and Platt twice (one win) over the next three weeks.

Berlin will look to its senior class in particular of Adam Kozubal, Zach Cancellieri, Sean Hunt, Jacob Ferland, Ryan Garrity, Griffin Hilbie, Garrett Fallon, Mantas Malinauskas and Marino to lead it back to the promised land.