Tanner Sparks (5) goes up for a catch in the end zone under pressure. | Tyler Hetu Buy this photo 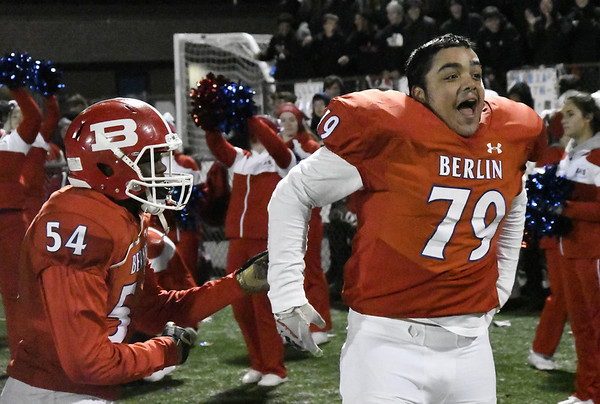 BERLIN - The 2021 season wasn't what Berlin football had hoped for.

But, even with playoff hopes at zero, the Redcoats were going to refuse to go out on bad terms.

Friday night's 51-12 win over New Britain closed the season at 4-6 (3-4) for Berlin, the first losing season since a vacated 2015 and 5-6 2013 season. A four touchdown night from Jamie Palmese put the exclamation point on a year where tough scheduling and injuries got to Berlin.

Berlin head coach Joe Aresimowicz said Friday was exactly what he wanted to see from his guys in order to send an influential senior class off into the horizon.

"We put a lot of focus on it (game prep)," said Aresimowicz. "The games we played already this year had already been played, and the one thing we could try and control was to go out on a high note with the seniors. They all played great and a lot of the younger players got in the game and also contributed, [getting them] ready for next year."

Among the group that made an impact Friday was Palmese, running for 223 yards with the scores, D'Amore with two sacks and Sparks with a 30-yard receiving score.

Aresimowicz sang the senior class' praises on Monday, talking about their work ethic and attitude with the team.

"They were the heart and soul of the team, and not being able to play their junior year really hurt their development and the team's development. They never quit, they never gave up and they always gave you everything they had. ... They never once held back, never had excuses and all just played together."

Instead of leading with words, the group worked hard and let the results do the talking. Aresimowicz said the work from offensive leader Palmese and defensive leader D'Amore were big for the team, while blue collar players like Sparks, Cote and Sekoll were an equally important supporting cast. Rivera, according to his head coach, was the most vocal and emotional player among the seniors.

"I think their actions always spoke louder than their words," said Aresimowicz. "They weren't the most vocal group, ... I think younger players will pull a little bit of everything from the older guys and hopefully put it together for a winning combination."

Key players coming back next season for Berlin include Toby Lavender, a nice complementary back to Palmese all season, Lorenzo Miele, the team's leading passer, Jon Jon Morales, the team's speedy do-it-all player and Will Gomes, the team's second leading tackler from the season.

Expectations for next year won't change as the next crop of soon-to-be upperclassmen will fill big shoes left behind.

"The program is in place. These younger guys, soon-to-be seniors and juniors, have learned a lot from these seniors. ... We had five freshmen that were practicing and competing at a high level. ... I think it's all going to pay off in the future and I think it comes down to their offseason commitment."

The Redcoats now embark on an offseason where the players are already eager to get into the weight room and get ready for 2022. A combination of weight training, speed and agility courses and passing camps will take place over the next few months as Berlin preps to get back to a winning season and make another run in the CIAC state playoffs.

END OF THE SEASON LEADERS

In passing, the Redcoats were led by Lorenzo Miele's 1,075 yards passing, having missed two games due to injury. He had nine touchdowns and four interceptions. Toby Lavender also saw time under center, the most among backups, passing for 216 yards with one score and an interception. Palmese also passed for 43 yards with a touchdown and interception.

Berlin's running back room was crowded this fall, with Palmese closing the season on 1,256 yards rushing and 17 touchdowns. Lavender was the next leading rusher at 499 yards and four scores.

D'Amore finished the season the leader in the entire state of Connecticut in tackles, racking up 156 stops with 18 for a loss. He also finished with four sacks, a team-high.