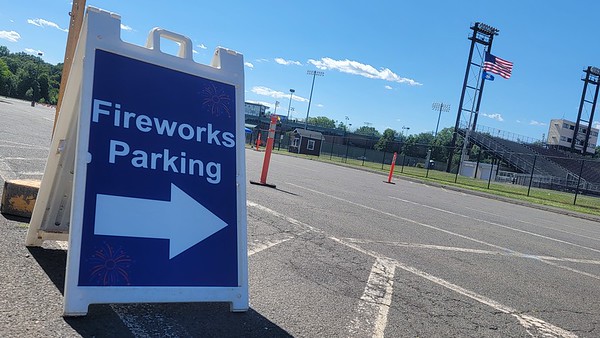 Dean Wright | Staff Crews move tents next to the fireworks launch site in preparation of the show. Buy this photo

With a pass to the Willow Park area, Fred Issakhani, Dorothy Issakhani and Makayla Issakhani said they come as often as they can to the Big Boom.

"We always come here because it's the best fireworks. Period," said Fred of New Britain. "All my friends, anybody that ever came, always say let's go to New Britain for the fireworks. For some reason, this is the best one here."

Dorothy said the family lived in Burlington now but in the past they had watched fireworks from near Stanley Quarter Park.

"It's a family event and a family day," she said. "You set up games and food. Come set your blanket up and go out for the day. Do your thing and come watch the fireworks."

Outside of watching the fireworks, the Issakhani family has a barbecue with loved ones and makes chicken and beef kebabs or hotdogs.

"I am glad that in today's day and age we are still able to go and watch the fireworks with everybody and it's not canceled," said Dorothy. "It makes you appreciate all the simple things after living in the pandemic."

Among those simple pleasures, Jean Paul said one of his favorite foods to eat over Independence Day were barbecue ribs cooked well done.

"At its core, New Britain is a city founded on hard work, grit, and the determination to build a better life for those you love," said New Britain Mayor Erin Stewart. "These are the same principles and characteristics held by our Founding Fathers, which allowed them to fight for the independence we are celebrating today."

Stewart said the annual fireworks display was something for all ages to enjoy and that the city's parks and recreation department works hard to make it memorable.

The mayor said Independence Day was a great time to gather and celebrate freedom with family.

Given that the U.S. was born out of armed conflict, Stewart said it was important to remember its defenders.

"Here in New Britain we are incredibly grateful for our veterans and their willingness to answer the call of duty without question," she said. "There are actually 25 monuments throughout the city honoring those who have served this country and we are appreciative of the sacrifices they made to protect the freedoms that the independence of our country allows us."

Eleanor Godway and Janice Mathews spent part of their day walking in Stanley Quarter Park and enjoying the weather. Mathews said they would likely not be going to the fireworks.

"I'm having a hard time celebrating our country," she said. "For me, today is just a walk with a friend in the park."

She said she would like to see the makeup of the U.S. Supreme Court changed in light of recent decisions.