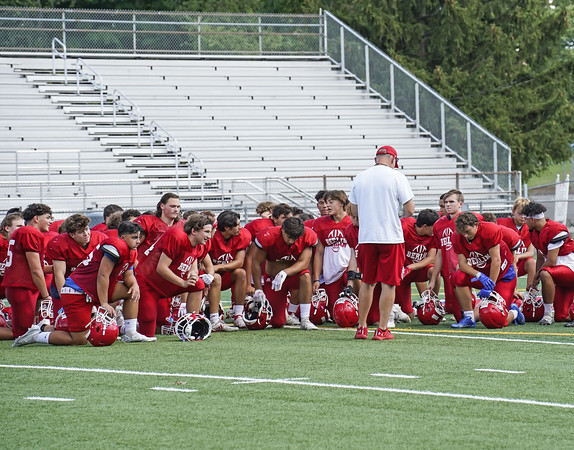 HEBRON – The Berlin Redcoats and the RHAM Raptors are each coming off big-time victories in Week 1 in two very different fashions.

For the Redcoats, they pulled ahead in the first half to a 17-point lead and rode that to an eventual 38-28 win over the Platt Panthers.

The Raptors found themselves trailing 20-0 at the start of the fourth quarter before the tides began to turn in their favor. Max Nylen punched in a rushing touchdown with eight minutes to play to get the scoring started. A safety, 76-yard kickoff return by Nylen and another rushing touchdown in the final minute capped off the comeback for RHAM to win 23-20.

Berlin saw an all-around strong performance from a lot of their playmakers in Week 1. Senior quarterback Lorenzo Miele was 13-for-20 for 149 yards and two touchdowns. They also had two players finish the day with more than 100 all-purpose yards in junior Toby Lavender and sophomore Kyle Melville. Lavender had 101 total yards, while Melville collected 82 rushing yards, 59 receiving yards and 31 yards on kick returns.

Adding to the production on offense was senior Josh Grimm who reeled in three balls – all for touchdowns – for 68 yards.

Lavender also had an interception and a passing touchdown to his credit against Platt.

Berlin head coach Joe Aresimowicz has noted he’ll be leaning on his veteran leaders this season to get back to their usual winning ways after a 4-6 campaign in 2021. Last season the offense wasn’t shy to score points in more than a handful of games, but their defense gave up too many points to keep some games competitive.

These teams have no recent history against each other, but this matchup will be a good barometer for what type of season it could be for both sides. Both Berlin and RHAM had convincing wins in Week 1 a season ago before losing the following week.

Ahead of the season Berlin head coach Joe Aresimowicz said the defense should be the strength of this team, but the offense proved more than capable in Week 1. Between Lavender, Meile and Melville the team combined for 181 yards on the ground after they had an overhaul at the running back position since last season. Not to mention the full backs Will Gomes and Elijah Santos had quiet days against Platt. If the offense is able to keep up a high level of production with a defense that is supposed to be their strength, Berlin could get back to the level their accustomed to and be a very tough team to beat this season.