Berlin football's Santos proving his worth early this season 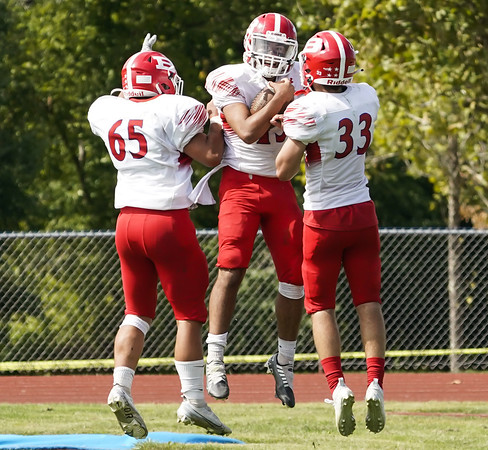 BERLIN ŌĆō Over the offseason, the Berlin RedcoatsŌĆÖ coaching staff were in search of names to help them replace Jamie Palmese as one of the top runners in their offense. If you looked at head coach Joe AresimowiczŌĆÖs depth chart this summer, you may have seen names like Toby Lavender or Will Gomes as some of the teamŌĆÖs options in the backfield. A name you would not have seen on the two-deep, however, was junior Elijah Santos.

Since being presented with the challenge of taking over some of the snaps at full back, Santos has done nothing more than seize the opportunity.┬Ā

The junior had a modest day in Week 1 against Platt with just one carry and one reception to his credit for a total of seven yards.┬Ā

In Week 2, however, the Redcoats gave Lavender the day off which opened the door even wider for Santos to leave his stamp on the game. Santos rushed for 39 yards on four attempts with a pair of touchdowns. He capped off his hat trick in the second half with a 63-yard touchdown reception as Berlin continued to pile the points onto RHAM.

ŌĆ£I tell [Santos] every day, ŌĆśyou were not even on our depth chart,ŌĆÖŌĆØ explained Aresimowicz. ŌĆ£So, in the offseason he decided he didnŌĆÖt like that. He still wasnŌĆÖt on the depth chart at the start of camp, and now heŌĆÖs starting.ŌĆØ

Santos ranks second on the team in all-purpose yards with 109, trailing only sophomore Kyle Melville firmly in the lead with 250. He is also tied for the lead in touchdowns scored with senior wideout Josh Grimm with three apiece.

The Redcoats, Santos and the rest of their offensive weapons will have the opportunity to add to their portfolio this Friday when they matchup with Fitch to try and keep their perfect record alive.