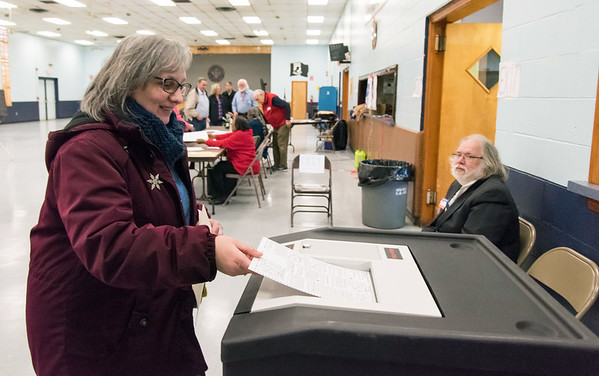 02/26/19 Wesley Bunnell | Staff Approximately 120 voters as of 2:00pm were at the VFW Post 511 Memorial Hall voting location for the 6th state Senate District seat. Cathy Teti , right, hands over her drivers license to check in at the voting location. Buy this photo

02/26/19 Wesley Bunnell | Staff Approximately 120 voters as of 2:00pm were at the VFW Post 511 Memorial Hall voting location for the 6th state Senate District seat. Cathy Teti smiles after placing her I Voted sticker on her jacket. Buy this photo

NEW BRITAIN — Republican Gennaro Bizzarro won the special election for the District 6 state Senate seat Tuesday, but as of press time the final tally was not available.

Democrat Rick Lopes conceded victory by 8:35 p.m. Tuesday night when unofficial and incomplete results showed him at 2,964 votes and Bizzarro at 3,481.

“This is what it is, I mean, the voters of the district voted and chose the person,” Lopes said at the Pulaski Club. “We did the campaign we needed to do. The importance of that is we worked it right. We worked it intelligently. We had a ton of support. That means only one thing. The win wasn’t there to be had. There’s really nothing we could’ve done to change these margins. That’s something the voters chose. Gennaro will be our senator for the next two years and we’ll work with him and do what we can and that’s how it’s going to be.”

The candidates were vying for the seat vacated by former Democratic state Sen. Terry Gerratana in January, who accepted a role as an adviser in Gov. Ned Lamont’s administration. District 6 represents New Britain, Berlin and part of Farmington.

Bizzarro said he is thankful for the voters who supported him he is ready to help Connecticut’s residents through his new role in the state’s Senate.

“I couldn’t have done it without the voters of the 6th district,” Bizzarro said. “I am looking forward to getting to know all the voters in Berlin and Farmington. Those of you in New Britain that I don’t know, I’m going to be there for you. I have heard you loud and clear. I told everybody that this was a special opportunity that the voters of the 6th district had to be heard on the governor’s proposed budget. I told you this was a referendum on tolls and taxes and we did not disappoint. Everybody came out and with one voice they said enough is enough.”

Bizzarro had a crowd celebrating his victory at The Avenue Restaurant in Berlin Tuesday night. Mayor Erin Stewart and Alderman Kristian Rosado were among those celebrating with Bizzarro in Berlin.

“I’m so proud of Gennaro,” Stewart said. “He’s been helping me since day one. To be here tonight celebrating his victory is a wonderful feeling and we are really grateful for all of the voters that came out to support his message and now the work begins. We’ll be there to support Senator Bizzarro every step of the way.”

“I’m just so ecstatic that the voters in New Britain, Berlin and part of Farmington voted against tolls, voted against raising taxes, voted against the governor’s agenda and I’m so proud of the newly elected state Senator Gennaro Bizzarro and for all the people that worked so hard,” Rosado said. “We are going to celebrate tonight and we are going to back to work tomorrow.”

One of the towns that made a significant difference in the final decision was Berlin. In Berlin, 1,819 residents voted for Bizzarro while 879 supported Lopes. In New Britain, Lopes was ahead with 2,392 votes and Bizzarro had 1,862.

Farmington had 363 total votes, Bizzarro was ahead with 203 of those votes and Lopes had 160 of them.

Poll workers said Tuesday was a “slow” day at the voting booths with only 7 percent of registered voters turning out in New Britain as of 4:08 p.m. That number accounts for 2,567 voters across the city’s 17 polling locations.

Gail Bates, moderator at the Berlin Senior Center, thought that the slow turnout was only going on in Berlin since both candidates are from New Britain.

“This one is really slow today and I think is because the two candidates reside in New Britain and they are not really known to the population in Berlin,” Bates said. “I think that if it was a Berlin candidate that was running for office, this would probably get a bigger response.”

By 2 p.m., Berlin’s registrar of voters reported that 1,242 residents had voted. By that time, the polling location that had the largest number of votes cast was in Berlin, with 379 people casting a ballot at Mary E. Griswold School, 133 Heather Lane.

No problems at polling places were reported on Tuesday.

“The machines have been running fine,” Bates said.