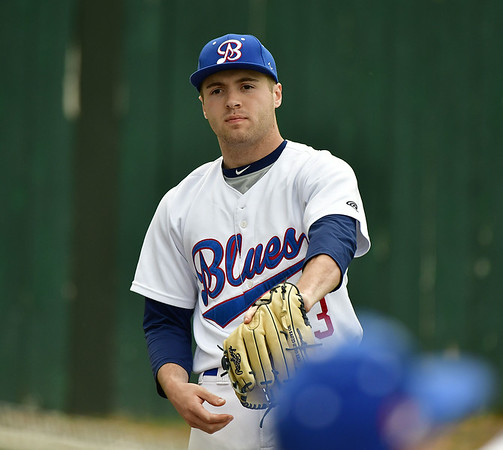 Ahead 9-2 going into the bottom of the eighth inning against Westfield, the Bristol Bluesâ€™ bullpen and defense blew another late lead and spoiled another fine performance from their starting pitcher in a 10-9 walk-off loss Saturday night.

A two-run triple from Griffin Schneider in the eighth gave the Blues what looked like a safe, comfortable seven-run cushion and set up Arjun Thakar for the victory after the right-hander was terrific in giving up two runs on just five hits with 12 strikeouts and a walk in seven innings.

But the Starfires (4-6) started a rally off reliever Tim Pfaffenbichler, who allowed three earned runs without recording an out. An error by Pfaffenbichler let the first run cross, and Sean Moorhouse followed with a two-run single to chase Pfaffenbichler and bring on Dominic Niman.

Sean Muprhy then roped a two-run double, and Andrew Selima followed with an RBI single to cut Westfieldâ€™s deficit to 9-8 with no outs.

Tommy Hughes took the loss after he relieved Niman and struck out Jermiah Vargas before walking Moorhouse. A wild pitch put the game-tying and game-winning runs in scoring position, and Thomas Joyce tied the game on a sacrifice fly.

On a full count, Anthony Clark then drove in the game-winning run on a walk-off single to score Moorhouse from third.

Austin White (3-for-5, two RBI, two runs with a walk and his seventh stolen base) continued his strong start to the season, and Zeke Diamond (3-for-5, two runs) also helped pace the offense. Brandon Miller and Kasey Bass each tallied two hits and two RBI, and Christian Beal and Brogan Searle-Belanger each had a pair of hits as part of 16 knocks for Bristol.