Season Preview: Better consistency will be key for CCSU women's basketball this season 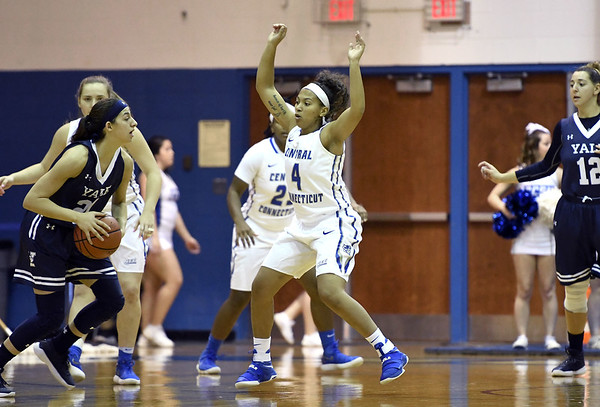 An opponent would take a slight lead in a game against the Central Connecticut State women’s basketball team and before the Blue Devils could regain control of the situation, they were looking at a large deficit they had to try to overcome.

It’s part of the reason CCSU won just seven games last season - all in Northeast Conference play - and ended up finishing in the bottom half of the bracket for the conference tournament when it could have easily finished in the top four.

“I think staying consistent,” Patterson said on the biggest key to the Blue Devils’ success this year. “When things aren’t going our way - coach tells us this all the time, basketball is a game of runs and teams are going to have them - we have to be consistent and not overreact when they have those runs. That’s a big emphasis we need to have this year, which is to relax and play our game and work through those moments so 10 points doesn’t turn into 20 points.”

It didn’t help much either that CCSU lost all 12 of its non-conference games to start the season against teams like West Virginia, Virginia and Penn State, as well as 12 of its first 13 overall. The Blue Devils haven’t had a winning season 2014-15 when they went 19-13, but have fared better against NEC opponents, having reached the conference tournament in eight of the past 10 years, including the quarterfinals last season.

This season, CCSU was picked eighth in the preseason poll.

“We had so many new kids [last season] and did have that time in the summer like we did this year,” head coach Beryl Piper said. “So that made it even harder last year. On top of that, our season was tough early on. We had a very, very tough schedule so you’re trying to get all these new kids to play against good teams and trying to figure out our system on top of that. Once we got into conference play, we were still in the process of trying to find ourselves. This year, we have a good nucleus of sophomore kids to go along with our seniors, who have been through those games.”

That should be the biggest bonus for the Blue Devils, who only lost two players to graduation in guard Morgan Johnson and forward Brianna Jacobs. Johnson averaged 6.1 points per game last season, while Jacobs contributed 4.1 ppg, meaning CCSU didn’t most much offense and have plenty of players who have already been through those ups and downs.

The Blue Devils return their top scorer and assist leader in Patterson, a Second-Team All-NEC selection last season, who finished out the year with 13.9 points per game and 3.4 assists. Also back is defensive standout Andi Lydon, who like Patterson started all 30 games, and averaged a team-high 6.3 rebounds per game and 32 steals. She was also second on the team with 11.1 ppg. Sydney Hines (6.5 ppg) and Denisha Gardener (3.4 ppg) are the other two seniors on the team.

And so far, the younger group has impressed the veterans on the team.

“I think it helped we came up in the summer and had a chance to bond on the court and off the court,” Lydon said. “That was really helpful and its showing. We’re a lot further along than we were at this point last season.”

CCSU will get a chance to see how far it’s actually come along thanks to a diverse non-conference schedule that will see the team go up against opponents from the Ivy, Patriot, Big Ten, Atlantic 10 and Mid-American conferences among others.

Among the Blue Devils’ opponents will be Vivian Stringer-led Rutgers, Buffalo and UMass. Up first will be Brown University tonight. CCSU lost the meeting last year 78-55.

“This year, we have a lot of teams that are beatable,” Patterson said. “There’s a lot of tough teams, but teams we know we can grind with and compete against. I think that will help us and pull [out a win] down the stretch and that should help us once we get into conference play because we’ve been in every situation. There’s not really any teams in our conference that are going to beat us by 50 [points], so there’s a different level of play this year that should benefit us a lot.”

Still, the players know results on the court matter and that comes down to how they play, which will determine if CCSU will be hosting that conference tournament game this winter. That of course starts with the non-conference slate and then with the Blue Devils’ NEC opponents.

“I think a goal as a team we should have is trying to beat a team at least once and not have any opponent sweep us like some were able to last year,” Lydon said. “If we can get at least one win from each team, that could go a long way.”