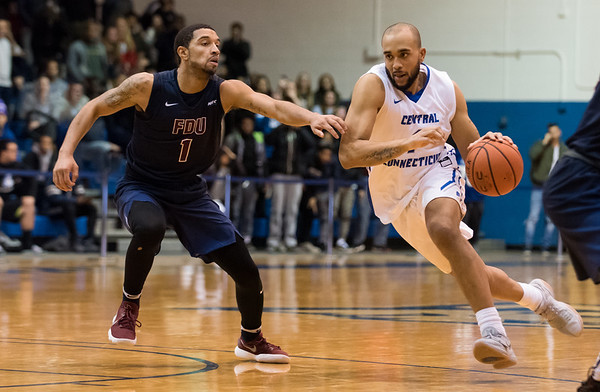 It’s the approach he took when he was hired to rebuild the Central Connecticut State men’s basketball program from the ground up in 2016 and it’s the same one he’s taking into his third season as head coach.

In other words, it’s all about trusting the process, even as the Blue Devils have increased their win total in each of his first two seasons.

“I know a lot of people are impatient,” Marshall said. “They think because you have a new coach and some players you’re supposed to win right away, but it’s a process. For us, we won six [games] our first year, 14 last year. I’m not going to guarantee we’re going to win more than that this year, but I believe we can. It’s a process of getting the right guys in here to fit your system and your style and are willing to put in the work in the gym and we’re reaching that point.”

Many of the players on CCSU’s roster have been brought in by Marshall, bought into what the coach is trying to do and are working to establish a culture of winning for a team that has eluded the program for nearly a decade.

This season, CCSU was picked sixth in the NEC preseason poll.

“The biggest thing we took away from last year was the [lack] of togetherness,” said junior forward Tyler Kohl, who was a preseason All-NEC selection. “Last year we weren’t really a team. We had a lot of different cliques, a lot of different people that did their own thing. But with coach Marshall and the new guys coming in, we’re more together. The culture is different. Everybody likes each other and hangs out a lot of the court and that translates on the court.”

That might be the biggest bonus for the Blue Devils, who only lost two players off last season’s team to graduation in forward Mustafa Jones, the team’s second leading scorer at 10.3 points per game, and guard Shakaris Laney. Austin Nehls (9.7 ppg) and Eric Bowles (4.1 ppg) are also gone.

CCSU returns its top scorer, rebounder and assist leader in Kohl (16.7 ppg, 8.2 rpg, 4.1 apg) and fellow starter, center Deion Bute (10.1 ppg, 5.2 rpg), to go along with key returnees in juniors Joe Hugley (9.5 ppg) and Tyson Batiste (2.8 ppg). The roster also features five freshmen: Ian Krishnan, Will Ellis, Thai Segwai, Karrington Wallace and Mike Underwood. Most of them are expected to contribute in some way this season.

And so far, the young group of five has impressed.

But before the Blue Devils even get to that point in the season, they’ll get a good gauge of where they’re at thanks to a non-conference schedule that will see them play opponents from the America East, ACC, Big East, MEAC, Ohio Valley, Pac-12 and West Coast conferences.

Among those opponents will be Patrick Ewing-led Georgetown, Providence, Virginia Tech, and Oregon State. The Blue Devils are also slated to appear in the Jersey Mike’s Jamaica Classic.

Up first is the University of Hartford at Chase Arena tonight. It will be the fourth straight year CCSU and the Hawks will play in the season opener. Hartford won 85-84 in overtime in 2017.

Georgetown awaits four days later as part of the Jersey Mike’s Jamaica Classic for the first-ever meeting between the two programs. The Blue Devils will then head to Montego Bay, Jamaica to play Austin Peay (Nov. 16) and Florida A&M (Nov. 18). CCSU will also travel to Loyola Marymount (Nov. 21) as part of the event.

The Blue Devils have another tough test in ACC-opponent Virginia Tech on Dec. 1. It will be another first-ever meeting for the men’s basketball program when it travels to Cassell Coliseum in Blacksburg, Virginia. The game at Providence will take place on Dec. 16, while the matchup at Oregon State will be played on Dec. 29 before beginning NEC play Jan. 3 against Wagner.

“You obviously have to play some games against bigger schools to make a little money to take care of the program,” Marshall said. “But it’s also good for the kids to know what it’s like to play in those types of arenas, have games on TV, play against the kids on the so-called national radar. If you can get an upset or play close, it makes you feel good. Then you want to schedule some games you can win. You don’t want to go 0-13 out of conference.”

As for the challenge, that’s just fine with the players. They know the opportunity it presents, especially with the belief opponents aren’t making too much of this season’s Blue Devils.

“If we can take care of business against these teams, we know in the NEC we can handle the competition,” Kohl said. “It’s kind of better that way. We were picked sixth in the preseason poll and a lot of teams don’t have faith in us, like ‘oh, it’s Central,’ but that’s the beauty of it all. When it’s all said and done, I feel like we’re going to be at least hosting a conference tournament game.”

Still, they also know results on the court matter and that comes down to how they play, which will determine if CCSU will be hosting that conference tournament game this winter.