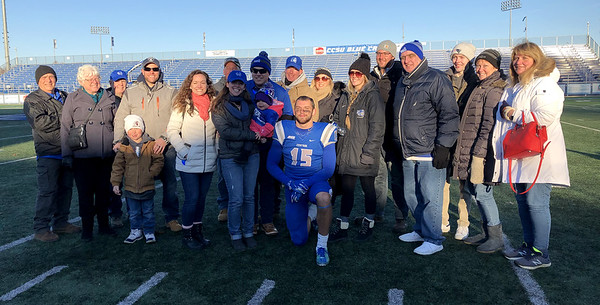 “Her smile lights up the room,” he said.

Decked out in a small blue No. 15 jersey, Eleanor stood next to the orange 10-yard marker on the Central Connecticut State sideline and began to dance to the beat the marching band was playing Saturday at Arute Field.

She couldn’t stop smiling and laughing. Neither could her parents, Jess and Elan, who were standing just a few feet away. It was more than an important moment, it was a special one.

It’s a journey where Eleanor, who turns 2 in January, and Mushaw, the CCSU linebacker, are forever linked. One that began with a simple cheek swab that led to Eleanor receiving bone marrow donated from Mushaw in July 2018 that helped cure her from a rare immune disease, and the family meeting Mushaw for the first time in person on Friday night ahead of Saturday’s game against St. Francis (Pa).

“[Mushaw] walked in the door [Friday] and all we could do was smile,” Jess said.

It wasn’t always like that. There were plenty of moments filled with fear and anxiety, especially during the early months where Eleanor got sick and the doctors struggled to find a diagnosis. There were hospital stays at Children's National Medical Center in Washington, D.C., which the family from Northern Virginia praises for helping their daughter, because she couldn’t fight off any kind of infection. Germs, that most people are able to fight off, were deadly. There also was a wait to find if a donor was even available.

According to “Be the Match,” the organization that paired Eleanor’s family, who asked not to have their last name published, and Mushaw, someone is likely to find an adult donor 77 percent of the time if they’re white. That number drops to 57 percent for Native Americans, 46 percent for Hispanics, 41 percent for Asians and 23 percent for African Americans. Eleanor has Native American heritage.

And when a donor did match, there was the chemotherapy Eleanor had to go through in preparation to receive the transplant, getting sick daily in an effort to save her life.

“She’s always had fight and that’s the kind of thing that’s always kept us up,” Elan said. “She’s like, ‘Oh I’m puking, but I’m going to play,’ because she didn’t know what was going on.”

“She still smiled through most of it,” Jess added. “There were some dark weeks, a solid month that was very dark. We were in the ICU and she wasn’t smiling and her perky self and when we started to see her personality slowly reemerge, we knew we were heading in the right direction.”

Mushaw finally got to see that personality for the first time in person this weekend, to hear Eleanor chant his name, “Mike! Mike!” and to hold her.

“It was surreal,” the 21-year-old said. “We FaceTimed and called almost about every weekend and finally being able to meet them, see how energetic Eleanor is in person, it was amazing. My new extended family.”

That’s what Eleanor’s family and Mushaw’s family now call one another. Until July, at the post-transplant one-year mark, Mushaw and Eleanor’s family could only contact each other through anonymous letters. All Elan and Jess knew about the stranger who had helped saved their little girl at the time he was “19 years old and a guy.” Donors and recipients are kept strictly confidential and could be from anywhere in the world.

So when given the choice, Mushaw signed paperwork that allowed the recipient of his bone marrow to contact him beyond the letters. Eleanor’s family was already in the process of doing the same. And when Mushaw placed the first phone call, weeks later, there were plenty of tears and a strong bond with people neither had met only became stronger.

“I was so elated to put a voice to the man who was our daughter’s hero and our hero, frankly,” Jess said. “And from our first conversation, he told us he played for Central Connecticut State University and that he would love for us to attend a game. We told him name when and we’ll be there.”

So it was only appropriate when Mushaw, wearing cleats with Eleanor’s name on them, ended Saturday’s game with a sack to seal CCSU’s 38-31 overtime win against St. Francis to keep the Blue Devils atop the NEC standings.

A perfect way to cap off an emotional day.

And to think, Mushaw said, this all began with something as easy as a cheek swab back in September 2017, his freshman year. CCSU’s football program, under the direction of former head coach Pete Rossomando, had partnered with “Get in The Game, Save A Life.” Through “Be The Match,” that campaign works with college football team, encouraging players and others on campuses to enter a bone marrow donor registry.

“Once we figured out that I was a perfect match and it happened, there aren’t any regrets about it,” Mushaw said. “It was amazing.”

Mushaw underwent a three-hour procedure in Boston on July 2, 2018. He had two needles inserted into his pelvic bone to extract marrow and as a result, he missed all of summer workouts and the first week and a half of training camp as the Blue Devils were preparing to defend their NEC title last season. He couldn’t lift more than 10 pounds, walk up stairs or bend over for two weeks.

It was a small price to pay.

And Eleanor’s family couldn’t be more grateful. She started day care in the spring, a place that germs are plenty, with no real worries of ending up back in the hospital. She’s off the numerous medications she had to take.

All because of a simple cheek swab and a willingness to help others.

“Just wow,” Elan said after the game. “Couldn’t have scripted [Saturday any] more with Eleanor’s donor getting the game-ending sack. It added more emotion to an emotional day. The score didn’t matter with what we’ve been experiencing here [at CCSU] and the awesomeness that is Mike Mushaw.”