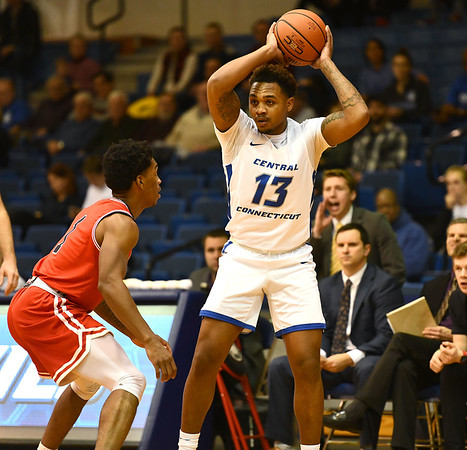 NEW BRITAIN - The Central Connecticut menâ€™s basketball team entered Thursdayâ€™s game against LIU with a 0-23 record when it has failed to score more than 78 points in a contest.

After a close first half in which the Blue Devils trailed by just three points, the Sharks broke the game open with a number of little runs in the second, handing CCSU a 90-74 loss at home and sweeping the season series.

The Blue Devils (2-24, 1-12 NEC), meanwhile, shot just 39.2 percent, making 29 of 74 attempts. Jamir Reed led CCSU with 21 points off the bench, including seven3-pointers. Ian Krishman added 17 points and Trey Tennyson finished with 10, the only three players for the Blue Devils to finish in double figures.

It proved too much for the Blue Devils to climb out of and LIU has proven when it can score it can be tough to beat. The Sharks are now 12-6 this season when they score 66 points or more, 0-8 when they do not.

CCSU will next play against Bryant at home on Saturday as part of a doubleheader with the womenâ€™s team. The men play at 3:30 p.m. after the women play at 1 p.m.

It will be the second meeting against the Bulldogs in the last three games. Bryant won on Feb. 8 64-60.