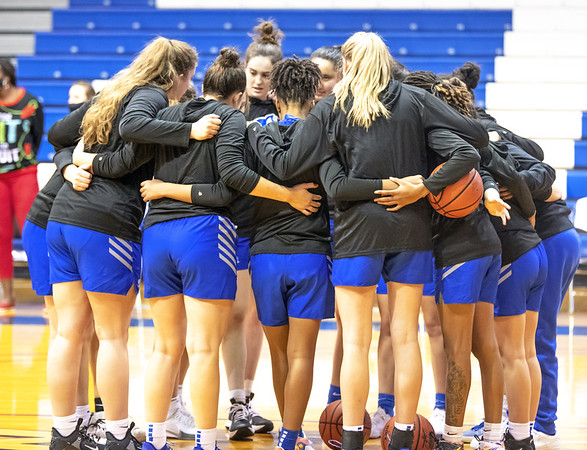 The CCSU women's basketball team huddles before a game this season | AP Buy this photo
Published on Tuesday, 9 February 2021 20:54
Written by MATT HORNICK

NEW BRITAIN - The Central Connecticut State womenâ€™s basketball team improved its record to 3-6 this season with a 61-53 win in the first of a two-game series against Bryant on Tuesday.

The Blue Devils ended their four-game losing streak and allowed the fewest points scored against them all season.

Forever Toppin led the way with 14 points and seven rebounds while Ashley Forker posted 12 points as CCSU took the rare halftime lead all the way to the end.Â

The Blue Devils barely led by more than two points in the fourth quarter, but they made their final run to secure the win in the final three minutes when Jamie Napoleon knocked down a baseline jumper off of a pass from Forker. Napoleon only scored four points, but logged a team-high 37 minutes, grabbed seven rebounds, three steals and contributed three of the teamâ€™s seven blocks.Â

CCSUâ€™s bench outscored Bryantâ€™s 22-6, led by 11 from redshirt senior Angelique Rodgriguez. The Bulldogâ€™s worst struggles, however, came from the three-point line and the free throw line where they made just 3 of 17 attempts from long range and only two free throws on 15 tries. Bryant center Brooke Bjelko finished with a double-double in points and rebounds, but also went one for six on foul shots.

The Blue Devils did not have senior Emma McCamus for this game who remains out with an ankle injury.