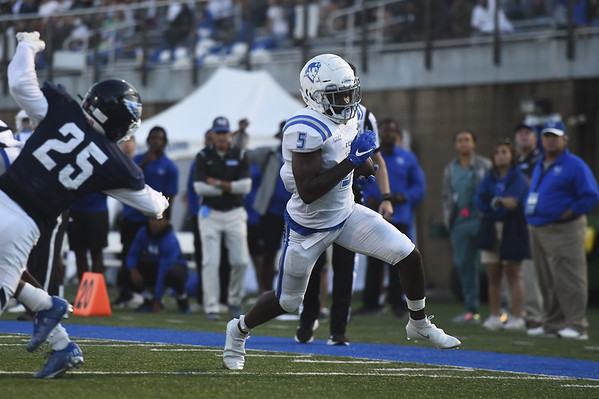 Everett Wormley runs in to the endzone for a score against Southern Connecticut. | Steve McLaughlin, CCSU Athletics Buy this photo
Published on Friday, 17 September 2021 16:57
Written by TYLER HETU

NEW BRITAIN – Central Connecticut made the trip to Staten Island last week, narrowly coming out of last Saturday with a 21-19 win over Wagner due to a second-half surge by the Blue Devils. This week, CCSU stays home to host an SEC Country school from the Southland Conference in Southeastern Louisiana.

Fifteenth-ranked Southeastern gets its first ever look at CCSU in program history as both sides aim to build on 1-1 seasons in Week 3. Southeastern, a dynamic team of playmakers, lost in a barnburner to Louisiana Tech (FBS) 45-42. The Lions hung around all game before LA Tech was able to put the final touches on the win.

The Lions out-gained the Bulldogs in yards at 594 to 448. Quarterback Cole Kelley passed for 495 yards with three touchdowns and two interceptions. He also led in rushing with 42 yards.

Going toe to toe with the Lions is a challenge for CCSU, especially with its offensive struggles through the first two weeks. In film, the Lions’ use of the whole field and spreading the ball around is what makes the offense tick, and it starts with the man under center.

"They throw the ball 70 percent of the time, and obviously the quarterback (Cole Kelley) is the guy that makes it go. He's surrounded by a plethora of skill players that are talented and there don't seem to be a lot of mistakes on film at least,” said CCSU head coach Ryan McCarthy. “… They do a really do a good job schematically on offense just giving you multiple looks, using the entire field and spacing the field. That's the big thing we have to do, defend the pass."

Kelley, a towering 6-7 260-pound quarterback, is an Arkansas transfer. The decision to move closer to home has been beneficial for him as he’s now north of 4,000 passing yards in his college career and has over 50 all-purpose touchdowns as well.

The senior has worked his way onto some draft boards and has been a game-changer for a Southeastern team that is making a push for an FBS title.

McCarthy was candid on Kelley’s talents, having seen him once as a true freshman at Arkansas, remarking on his size and ability to get the ball out of his hands when things break down around him.

"They'll rush (Kelley). I know he's carried the ball the most amount of times,” said McCarthy. “I had a chance to see him down in Arkansas for a few spring practices when he was a true freshman, and I don't think I've ever seen a quarterback that big in person. He's an impressive player, and he's obviously big, but he can make things happen when things break down. He's savvy enough to shovel the ball and get to his check downs. He has a really good understanding of where his guys are."

After Wagner missed a potential game-winning field goal to lock up a CCSU win, the Blue Devils went back to work in practice and in film to see where they need to clean things up. With the defense holding its own, the offense and special teams were areas in need of improvement, said McCarthy.

Getting all three facets of the game up to speed so one can help out the others is necessary, and if all are firing on the same cylinders Saturday, the Blue Devils have a chance to pull out a win.

"I think we're playing well enough defensively and they're going to be challenged (by Southeastern),” said McCarthy. “But, we've got to help them out with strong special teams play and obviously we've got to be strong on offense and eliminate the self-inflicted wounds when we're behind the chains. ... We have to play clean football and if we don't in all three phases, it'll be a long day for us."

On top of the success in all three areas, a big part of the final score will depend on the time of possession for each team.

The Blue Devils rank third in the league in time of possession averaging 38:37 per game. Not far behind is Southeastern, who ranks 16th with 34:48. Both sides can draw out a drive with success and convert as well (Southeastern is 100 percent in the red zone, while CCSU is at 60 percent).

On defense, McCarthy sees a lot of strong things from Southeastern, pointing to the need to get the run game going to help extend the drive and keep a potent offense off the field as long as possible.

“The biggest thing I see, schematically from a defensive standpoint, they're a lot more sound in what they're doing and you're not seeing those gaps or blown coverages through the first two games. They're big on all three levels and they're physical,” said McCarthy on Southeastern. “I don't think the first two opponents they played were more finesse, or spread, and we've got to go right at them and we've got to be able to run the football. We're going to have to keep that offense off the field and the gameplan will be to work the clock and keep Cole Kelley and his gang off the field."

So far this season opponents average 126 yards per game on the ground against Southeastern, scoring only three times. In the air, opposing quarterbacks are 43-for-74 (for an average of 300 yards) with two passes intercepted.

Romelo Williams, the Blue Devils’ starting quarterback through the first two weeks, will likely be the man under center for the bulk of CCSU’s offensive snaps this weekend. His progressions through his first two weeks of college football have been noticeable, but McCarthy thinks there’s still some room to mature.

"I think he has played fairly well through the first two weeks,” said McCarthy. “... I think he played well in Week 1, ... last week he had guys in his face all day long. ... He's got a good understanding of the offense and I think we have to get to a point where he's taking what the defense is giving him. …. If he can take what they give him and move the sticks, then I will start to see a full maturation."

The Blue Devils enter Week 3 with Everett Wormley as the team’s leading receiver with 168 yards and two scores. Rushing, Nasir Smith leads the team with 114 yards gained for an average of 4.1 yards per cart. Dexter Lawson and Jahlil Brown each have interceptions for CCSU.

Central Connecticut will take to the field at noon on Saturday looking to make it two wins in a row. The broadcast can be found on NECFrontRow.com with play-by-play from Bruce Biel and analysis from Marc Robbins.

Live coverage of the game will also be provided by the New Britain Herald’s Tyler Hetu on Twitter (@TheTylerHetu).

CCSU injury update: CCSU sophomore defensive back Toddreis Baltimore is out for the season with a broken tibia after being carted off the field last week at Wagner.

Southeastern injury update: Southeastern starting left tackle Jalen Bell is out for Saturday’s contest. Bell was a preseason all-Southland Conference pick and a first-team selection a year ago.

Road trip: A whopping 1,433 miles separates the campuses of Southeastern and Central Connecticut State, with a drive to and back going through 11 different states