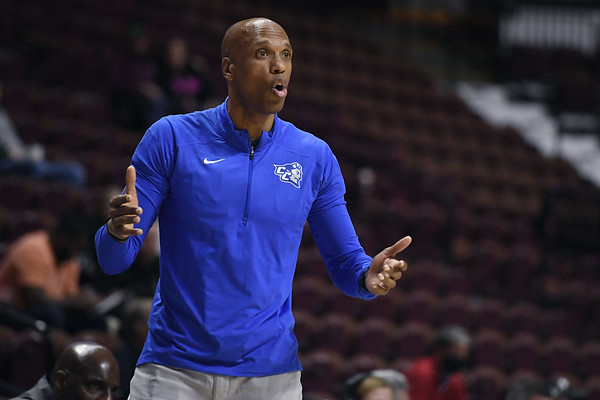 The Friars, who are currently receiving votes for the AP Top 25 rankings, are now winners of five straight and improve to 10-1 as they wrap up non-conference play. The loss moves CCSU to 2-8.

Providence got ahead early, running out to a 12-0 lead in the first half. CCSU answered with two scores across the next nine minutes of action as the Friars extended the game to a 22-4 score.

From there, it was damage control for the Blue Devils, who couldn't get the game closer than 15 points in the second half. Despite chippy play and a physical scheme from both sides, the Friars never lost total control of the afternoon as they entered halftime ahead 44-25.

The Friars dominated the game physically, scoring inside at will and creating lanes for their big men. At the half, they were shooting 50% from the field while CCSU was at 26.7%.

"This team is so big, physical [and] tough. They've got veteran guys ... and Ed Cooley, who I've known forever, this is home," said CCSU head coach Pat Sellers on PC and its style of play Saturday afternoon. "He's a tough guy, so his teams take his personality. He's got a tough hard-nosed team and this is what he does, it's what he always does. ... My hat's off to them. They're going to do some damage in the Big East."

In the second half, CCSU briefly gained ground on a 15-2 run, but PC's ability to slow the pace of the game and keep CCSU from gaining ground quickly.

Through the second half Sellers said the team was keeping track of the game through intervals in the media timeouts, trying to win each one as a way to look for a positive in the game.

"In the timeout, I said ... we were going to keep track of the score each four minute meeting," said Sellers. "I think at the 12 minute media (timeout) we won that one 7-2 and out rebounded them. At the eight minute, they won it, and at the last four minutes we won it. ... We try to look for positives as we go as a group and our guys have been using those four minute segments as barometers of where we are. The last four minutes, I thought we did a pretty good job."

Leading in scoring for Central was Tre Mitchell, scoring 15 points. Nigel Scantlebury came up one point short of a double-double, grabbing 10 rebounds with nine points. Jayden Brown also scored nine points in his return to Providence.

Reeves also led the team in assists with seven.

Next up for CCSU is Stony Brook, which will be a road trip on Tuesday. Tip will come at 6:30 p.m., with the game being broadcast on ESPN3.