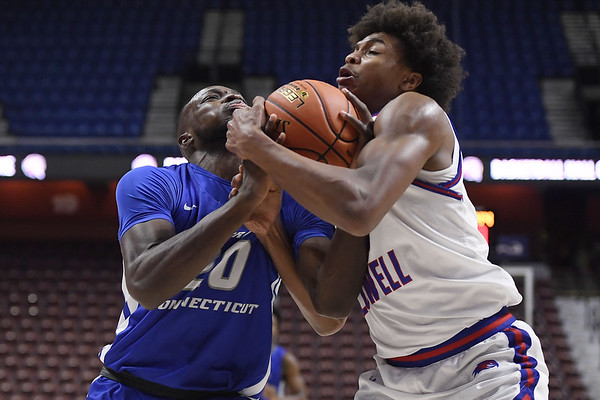 Rutgers pulled out all the stops Saturday afternoon in its win over Central Connecticut menâ€™s basketball, winning 79-48.

The Blue Devil men, playing their third game in four days, move to 4-11 (1-1 in Northeast Conference) on the season while Rutgers moves to 7-5 (1-1 in Big Ten). The game was played after COVID issues caused the game to be postponed in December. Saturday the Blue Devils played down five players, three of whom are regulars in the starting lineup.

Central hung around in the first few minutes of play before Rutgers turned it on, going on an 11-0 run to jump ahead 15-3 in the first half.

A Joe Ostrowsky 3-pointer stopped some of the bleeding, but Rutgers continued to be potent in scoring as it shifted its lead to 15 just past the midway point of the half.

A 15-0 run to close the first half had Rutgers ahead 44-14, and continued the run with six straight points to start the second half. Ostrowsky again connected on a jumper to stop the run but Rutgers went back to work and ran even further away with the game in the final 16 minutes.

Stephane Ayangma had a double-double in the loss, grabbing 10 rebounds to go with his 12 points. Ostrowsky had 12 points and three assists on a day where CCSU finished with a shooting percentage of 27%.

Cliff Omoruyi had 19 points and 12 boards for the Scarlet Knights.

After a handful of games in a short stretch, the Blue Devils will get a short break before taking on Sacred Heart at home Thursday night. First tip will come at 7 p.m.