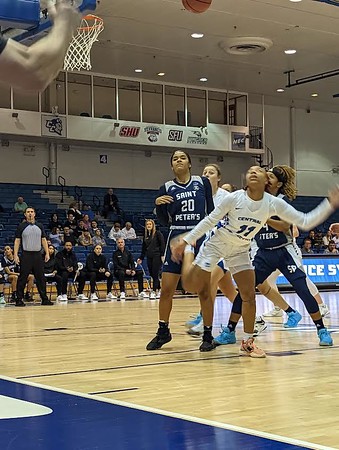 Staff photo by Chris Harris Central Connecticut State's Dejah Jenkins (11) attempts a shot during the first half of a NCAA women's basketball game against Saint Peter's on Wednesday, Nov. 23, 2022. Buy this photo
Published on Wednesday, 23 November 2022 16:27
Written by CHRIS HARRIS

Dejah Jenkins scored a game-high 18 points and Central Connecticut State used a first half defensive master class to beat Saint Peter’s 76-56 Wednesday at Detrick Gymnasium. It was the Blue Devils first home game of the season. It was their first win of the season as well.

“I think it was nice for us to finally put it all together and get a win in our first home game,” said Blue Devils head coach Kerri Reeves. “We’ve played really well against Quinnipiac, NJIT and UMass and it was nice to see them be rewarded for their hard work and dedication.”

Meghan Kenefick scored 16 points, six rebounds and three assists, Forever Toppin scored 14 points, had six assists and Amaya Williams had 10 points and three assists for the Blue Devils, who finished with 17 assists on 27 made baskets.

“We had contributions from everybody and everybody came together at the right time,” Reeves began. “We share the ball really well, we look for each other and that’s just a testament to who they are as people and not just basketball players and if we continue on this path and come together it will lead to a lot more victories for us.”

“I think my performance was a reflection of the team’s performance,” said Kenefick. She finished 6-for-13 from the field and had a block shot. “I think my teammates just got me the ball in my sweet spots and I was able to hit shots because they were able to find me.”

The Peacocks (0-5) got 14 points from Jada Williams and Rachel Kuhl scored 10 points and had three assists.

The Blue Devils, who opened the season with three straight road losses, will be home for the next three, including a matchup with Brown on Monday.