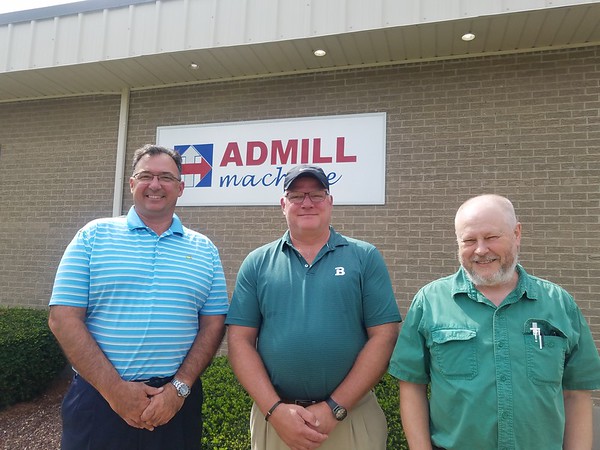 NEW BRITAIN â€“ Mayor Erin Stewart along with Admill Machineâ€™s owner and employees held a celebration on Saturday Sept. 22 to mark the companyâ€™s 30 years of service and the grand opening of a new facility at John Downey Drive.

â€śWe are proud to have such a longstanding, and thriving, company like Admill Machine headquartered right here in New Britain,â€ť Stewart said. â€śWe congratulate them on three decades of continued growth and wish them many more years of innovation and expansion.â€ť

Admill Machine was established in Bristol in 1988 by Krzysztof Rucz. The company has been moved to different locations throughout the years and 10 years ago it was moved to its current location at 150 John Downey Drive.

â€śWhen we grew, we had more work, we had to buy machines and we had to hire people so we needed more and more room,â€ť Rucz said.

The business serves as an employer to 140 people.

Admill Machine manufactures engine parts for the aerospace industry. While Pratt & Whitney is their main customer, they also work with the U.S. government, Rolls Royce, General Electric and ITP, among other businesses. The new facility has newer technology such as automation and computer controlled inspection equipment to reach high productivity.

â€śAlways being in the growth mode you never stop and slow down so itâ€™s almost like a continuation of what youâ€™ve always been doing,â€ť Jeffrey Hiller, president of the company, said. â€śYou are just doing what the customer needs and they are asking you to do more work, they are relying on you so you increase your business to meet your customerâ€™s demands.â€ť

Agnes Y. Pireh, human resources and public relations manager, praised the company for the growth and said that Saturdayâ€™s celebration was a well-deserved one.

â€śIn 2007 I joined them, and we were only 21 people,â€ť Pireh said. â€śNow we are 140 employees. That is something to celebrate. We celebrated all the employees who made this happen as a team.â€ť

â€śWe have nurtured a team environment where we have certain company goals, if the goals are met, there are bonuses paid out quarterly,â€ť Hiller said.

Hiller thanks Pratt & Whitney for helping Admill Machine grow and improve the business.

â€śThey want you to be successful so they can also be successful, because if we fail, they fail and theyâ€™ve had a big role in our success since 2004,â€ť Hiller said. â€śWithout them we wouldnâ€™t be where we are today.â€ť