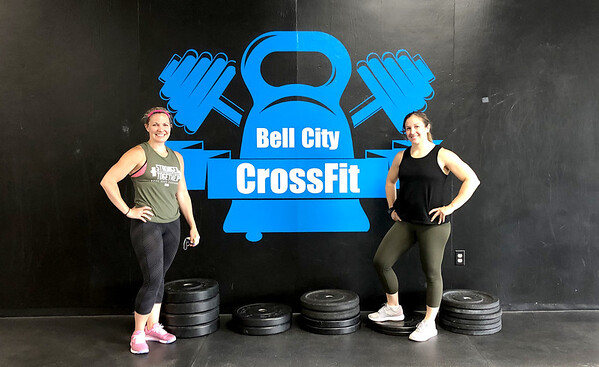 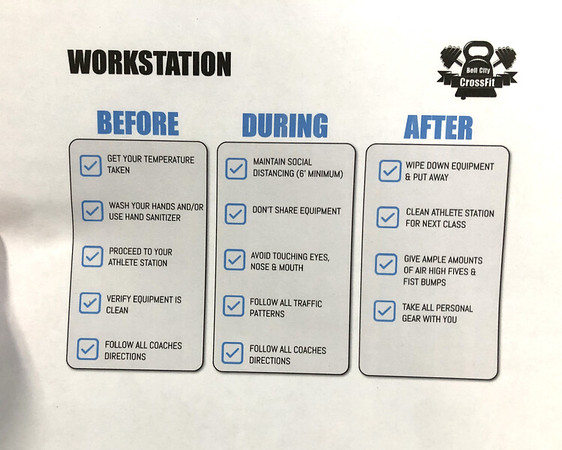 There’s arrows on the floor directing people which way to enter and exit the Bristol-based gym, equipment is taped off in 12 feet by 12 feet squares to adhere to social-distancing guidelines, each station has a sanitizing bucket (hand sanitizer, bleach solution to wipe down equipment, disinfecting wipes, a rag and a checklist for members to follow), there’s a forehead thermometer at the entrance of the workout space that will scan each person before they enter the room, showers are shut down.

“We’ve been communicating with our members on a regular basis about what to expect,” Melissa said. “And one of the requirements is if you’re not feeling well, stay home.”

It’s much different than when the gym was open three months ago, when much of the space was filled and members were able to jump from equipment to equipment and station to station. But the new layout and rules are all necessary precautions sports clubs, fitness centers, dojos and other places to work out must follow as part of Gov. Ned Lamont’s phase 2 for reopening on Wednesday.

“We’re super excited,” Nicole said. “Everybody is. [Our members are] itching to get back in.”

In order to do so, gyms and fitness centers will be limited to 50% of building capacity, posting clear signage and social distancing markers, increasing ventilation among other mandatory safeguards. Exercise equipment will also have to be 6 or 12 feet apart, depending on whether the gym requires a mask or not, and wiped down after each use, and lockers have to be spaced out.

To further comply with Lamont’s guidelines, Bell City CrossFit will be staggering its schedule, opening Mondays, Wednesdays, Fridays and Saturdays, while holding virtual classes, which it did during the pandemic shutdown, Tuesdays and Thursdays to do a deep scrub down - they already did a deep clean over the weekend. All classes will be limited to seven people at a time, must be scheduled, and will be 45 minutes long on the hour, meaning 15 minutes for cleanup at the end. Instead of communal chalk, the gym will sell its members individual chalk packets.

“The thing that differentiates us as a family-owned gym with a limited membership compared to an LA Fitness or Edge is we can control how many people can come in,” Melissa said, “and understand where they’re going to be positioned so we have a little more control over the situation and we have interaction with our members on a regular basis so we know what their concerns are and they know where we’re coming from.”

Even at larger workout facilities such as The Powerhouse Gym, which has considerably more members than Bell City CrossFit - around 3,000 compared to around 100 between its Berlin and Farmington locations - having a normal amount of classes can be a little more challenging depending on whether the gym chooses to go with the 6- or 12-foot guidelines. Under normal circumstances, The Powerhouse Gym offers 35 classes seven days a week with varying sizes. That will change.

“Many people have expressed their desire for no mask, so if we go no mask, we’ll basically have 20% of the room occupied,” said Jack Banks, who co-owns the gyms with Paul Carson. “If people come in with a mask, that’s a 6-foot distance. It’ll be strict. We really hate to turn people away, but we’ll have to because we have the floor taped off and if there’s not enough boxes on the floor, they’re not going to be able to squeeze in. We’re not going to allow it.”

Banks and the gym have also taken steps to make sure the workout area follows state guidelines. In addition to multiple staff meetings, Banks has bought a number of new products, including sanitizers, disinfectants, hand sanitizers, installed new stations for cleaning and put directional arrows on the floor of the gym. Cleaning crews will be on the floor at all times. Members will be emailed charts on when the gym is busiest to get an idea of the optimal times to swipe in. Banks also made sure the equipment is painted, cleaned and moved around for social distancing purposes.

Banks has even made sure to beef up the motor in a large fan inserted into a wall of the gym to help with air flow. According to the co-owner, it will suck up 20,000 cubic feet of air per minute, exchanging it every half hour. Whatever is needed to make sure the gym runs as smoothly as possible once it opens back up.

“We have such thoughtful members and so many of them are friends that they’ve expressed to us in emails that they’ll do anything it takes to get back in and follow the protocols put in place,” Banks said. “It’s impossible to monitor everyone every second of the day, but we have a great staff, which is important and many of our staff have been here for years and they want this to succeed.”

Of course, there will still be some challenges, the gym owners said. Making sure people sign up for classes in advance is going to be important as is making sure people still adhere to social distancing guidelines, but so too is getting people back in the door so the gyms are able to stay open and provide what the owners said should have been considered an essential business.

“We’re providing health and wellness services, which are critically important during these times,” Melissa Loranger said.

During the shutdown, Bell City CrossFit rented out equipment and offered remote coaching. The Powerhouse Gym offered a program called opt-in, which Banks said helped save the business in the interim, where members who still chose to pay their fees would tally that money and be discounted the day they return.

“I’d like to see our classes filled,” Nicole said. “We’d like to see our members back in here. They want to get back in and it’d be nice to get them back in person instead of just the computer screen. We just want to continue to help them with their health and fitness and nutrition. But we want to make sure we keep them safe too.”

And they’re just as eager to get started.