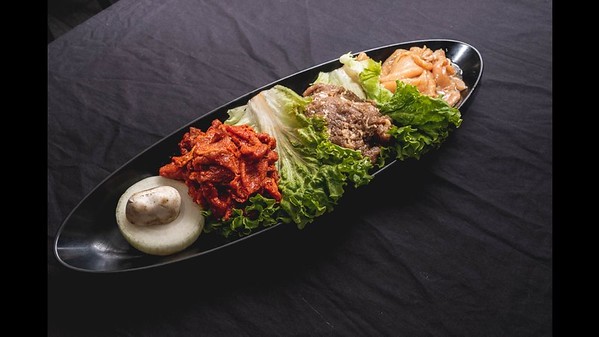 This is raw pork, beef, chicken Daeji Bulgogi, Bulgogi, Dak Bulgogi respectively. You can order this - and this cooks at your table. Photo Provided by Mark Moon, owner of - Seoul BBQ & Sushi Buy this photo 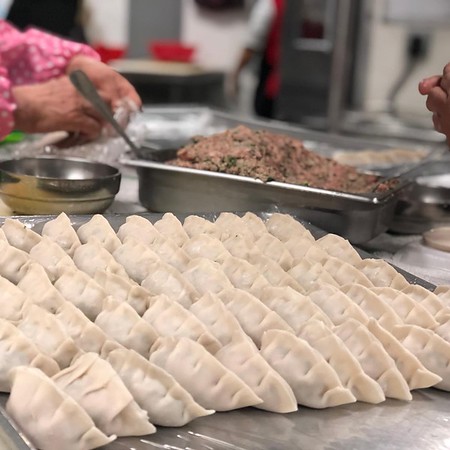 NEW BRITAIN – Seoul BBQ & Sushi in New Britain has been servicing the city for the past eight years, offering authentic, in-table Korean barbeque.

“It’s a great place for gatherings; we give lots of food. I think it’s reasonably priced in terms of what’s been happening with the cost of everything across the board and we have a very unique product that’s very good,” said Mark Moon, owner.

Even though the restaurant is not currently carrying sushi until further notice they still have an extensive menu to choose from. The appetizers include Gun Mandu and pork dumplings, Korean fried chicken wings and edamame. The Bibimbaps portion of the menu includes Dolpan Bibimbap and Dolsot Bibimbap. The Seoul BBQ includes marinated and non-marinated options like Galbi and Saeng Deungsim. The combos are served with Korean side dishes, three rice options and soon a tofu option. The specials include Jap-Chae Wok-fried glass noodles with beef and veggies and Tofu Kimchi Jaeyuk stir fried pork, kimchi and homemade tofu.

They also have soups and stews, cold noodles and an extensive drink menu.

“We use only the highest quality ingredients and freshest meats around, that’s why our food is so savory, fresh and one-of-a-kind,” Moon said.

They are staffed with three main cooks that cook throughout the week and two additional people that help them prep everything.

“Our team puts in tremendous effort in bringing the customers a consistent product and experience every time,” Moon said.

Seoul BBQ & Sushi, founded by Chong Pal Moon and Kyu Young Moon, has been rooted in the community since 2013.

“My parent moved out here in 1998. They were doing clothing stores, they used to own Pretty Woman and My Lady,” Moon said. “My dad said, let’s stop doing what we’ve been doing for 20 years and do something we have no idea about. One of his business partners had Seoul BBQ locations in Colorado and basically gave us his blueprint.”

Many of the pieces incorporated in the interior design of the restaurant are from Korea.

“My father tried to build a Korean restaurant (that you would find in Korea) in New Britain,” Moon said.

Seoul BBQ & Sushi continues to be a family-owned and operated business with Mark Moon taking over in April of 2019.

“I’ve been here since the end of 2015, it was a very slow hand off,” Moon said. “I’m not a restaurant person, I was a suit and tie guy before this so this is a challenge for me. My dad told me it will take two years for you to figure this out and I’m like, ‘let’s figure it out in one.’ Seven years later I’m still trying to figure it out, but every day for me is more experience.”

Seoul BBQ & Sushi makes sure to keep its employees up to speed with the industry and covid guidelines and changing times but does not steer from its origin too much.

“In the kitchen I like creating all types of things, mixing things, things that have been done, things that haven’t been done,” Moon said. “For now, I’m going to try and add some menu items, different kind of things to barbeque like vegetables, seafood, maybe duck. The barbeque grills will be baseless by July, if we’re lucky by June, and all my tables will be outfitted with new grills so that’s kind of exciting.”

The restaurant has also extended their model post-pandemic to include dine-in services, curbside pickup and delivery.

“Last year this time we were closed. I closed for six weeks and then when I came back, I was like ‘what do we have to do?’” Moon said. “This isn’t the best food to take to go some of it, but obviously with the pandemic it had to change a little bit.”

As restrictions are being lifted in May, Moon plans to put himself in a position to do more things in the area or surrounding areas once everything continues on the up and up with the restaurant.

“In a lot of ways, we’re blessed to be here in the position that we’re in and I think it’s a testament to the work and hours that everybody that works here put in. This could have easily all gone away but thankfully the PPP’s, some help from the government and just the loyalty of some of our best customers continued to show,” Moon said.