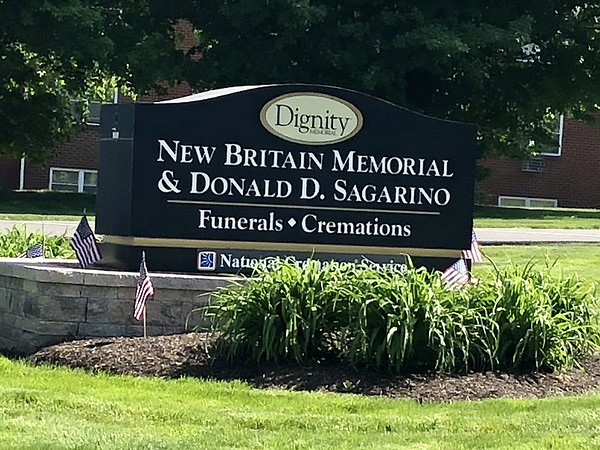 NEW BRITAIN – New Britain Memorial-Sagarino Funeral Home in New Britain has been servicing the city for over 100 years providing an array of funeral services.

“We just celebrated our 120th year anniversary,” said Danielle Weyant, manager at New Britain Memorial-Sagarino Funeral Home. “Unfortunately, we weren’t able to have a celebration due to the coronavirus.”

Located at 444 Farmington Ave., New Britain Memorial-Sagarino Funeral Home is a member of the Dignity Memorial network of funeral, cremation and cemetery providers.

“We serve the families in the most difficult times of their lives and we try to help you cope with that in a way that is suitable for you and your family,” said Ann Targonski, New Britain Memorial Funeral Home director. “As a funeral director when I sit down with a family, whether it was 40 years ago or now, my first question is how can I serve you? Tell me a little bit about your family and your loved one so I can see how I can serve you because we all have different visions of what a service for our loved ones should be like depending on what we’re accustomed to and our family’s traditions.”

New Britain Memorial-Sagarino Funeral Home, formerly Blogoslowski Funeral Home, has been rooted in New Britain since its founding in 1900 and continues to uphold a commitment to a high standard of service while leading, innovating and paying homage to their longstanding heritage in the city.

Over the century the funeral home has expanded their funeral services whether you are looking to arrange for a traditional funeral service, a Life Well Celebrated memorialization, plan to have a large gathering or would like a more intimate service their expert associates will work with you one on one to ensure your needs, wishes and budget are met.

“No matter what you ask us to be done we will do it without question,” Targonski said. “For instance, I had a gentleman who owned a garden center and his family wanted to have a service and instead of having just a casket or urn they wanted the whole room transformed into a garden center and we did that.”

“One thing that we do offer that other funeral homes don’t is our compassion helpline it offers our families unlimited complementary phone access to professional grief counselors for 13 months following their services. In addition to anyone who has attended the visitation or service for three months,” Weyant said. “We’ve had this for many years and it’s one of those benefits that you would not find at any other funeral home.”

The funeral directors also specialize in working with families to plan final arrangements in advance to help with how overwhelming funeral arrangements and associated expenses can be.

“This is probably one of the biggest things in the funeral industry now,” Targonski said. “With families now not living in the same area probably more than half of our funerals are prearranged in advanced by the person themselves. It’s something that they do for themselves and try to relieve some of that burden for their spouse or kids. And we do seminars for people to come in and ask us questions.”

The funeral home makes sure to keep its employees up to speed with the industry guidelines and changing times to better assist its customers.

“All funeral directors are required to take continued education,” Targonski said. “We are licensed through the board of health; we attend seminars; our companies require not only state required education we have other classes to take online and sometimes we have seminars for staff.”

They serve families of all backgrounds, cultures and faiths and their funeral team includes Polish-speaking and multilingual associates.

“We have a mixed crowd of employees so there are different levels of experience. We have people like me who have been in the business 20 years and up and we have some newer employees that have only been with us a several years,” Targonski said. “The interesting thing is when I became a funeral director having a woman being a funeral director as a profession was very rare; it was usually daughters or wives of funeral homeowners were basically clerical staff.”

New Britain Memorial-Sagarino Funeral Home has always been traditionally involved in the community.

They can be found online at dignitymemorial.com/funeral-homes/new-britain-ct/new-britain-memorial-donald-d-sagarino-funeral-home/2487?utm_source=google_my_business&utm_medium=organic or by calling 860-229-0444