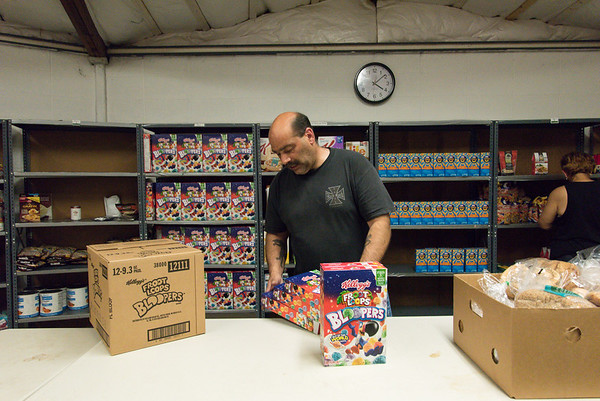 051917 Wesley Bunnell | Staff Baby food and items on the shelves at the HRA Food Pantry in Osgood Heights Park on Friday afternoon. Buy this photo

051917 Wesley Bunnell | Staff Two boxes were all that was left of the bread before the end of day at the HRA Food Pantry in Osgood Heights Park on Friday afternoon after a rush that morning by area residents. Buy this photo

NEW BRITAIN – A lack of funding from the city, and ultimately the federal government, is a looming concern for the Human Resources Agency of New Britain.

In May, the Common Council finalized the city’s plan to distribute money from the U.S. Department of Housing and Urban Development, allocating almost $2 million in funding to numerous organizations and programs that benefit low-income people. Every year, the city receives federal funds and distributes these funds to local organizations through Community Development Block Grants and HOME programs.

The HRA didn’t receive approval of CDBG funds for any of the programs and services it asked for, including the $10,000 the HRA asked for to support its New Britain Food and Resource Center on Osgood Avenue.

“Back in April, award notifications were made to the organizations who did or did not receive funding,” Mayor Erin Stewart told The Herald. “Like so many other nonprofit-based groups who rely on government funding, the time has come to look for creative financing opportunities. Government funds are drying up across the board.”

Caren Dickman, communications and grant development specialist for the HRA, said the HRA also receives funding from the American Savings Foundation and private donors. Foodshare supplies most of the food for the pantry, doing so at a nominal cost. Other food donations come from individuals, church groups and businesses.

But the organization still relies on the annual CDBG funding the city allocates to it.

“Despite promises from the city that they would support the pantry, they haven’t supported it in terms of the money needed to operate it,” Tricarico said.

The U.S. Department of Housing and Urban Development has not released its allocation for this fiscal year, though. President Donald Trump’s budget proposal threatens to eliminate funding for CDBG programs, so even the money distributed from the city in its HUD plan is in limbo.

The New Britain Food and Resource Center was created in 2009 to serve low-income New Britain residents who live below the federal poverty level and receive food stamps through the Supplemental Nutrition Assistance Program.

“For some people, it’s their single source of food,” Tricarico said. “The food pantry not being funded is really catastrophic to many families who aren’t going to be able to access their basic food needs.”

Juan Berrio, community and financial services programs manager for the HRA, said that the pantry on Osgood is one of few pantries in the west end of the city, as many of the others are located near downtown.

“Our food pantry has seen an increase in clients recently with the closure of other pantries,” Berrios told The Herald. “For example, some people used to go to the Spanish Speaking Center’s pantry, but now we get a lot of those families.”

Tricarico said he’s been working with the HRA’s finance department to try to find some way to keep the pantry open. He said he’s also been in discussions with some of the HRA’s community partners about one of them possibly sponsoring the pantry.

“The HRA is committed to keeping that food pantry open, even if the city isn’t,” Tricarico said.